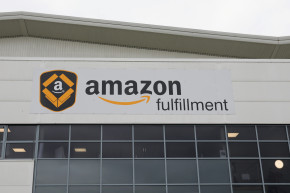 Amazon Sues To Fix Its Counterfeit Problem
By Sara Morrison

The massive marketplace is, for the first time, suing some vendors for allegedly selling counterfeits

Amazon is fighting back against alleged counterfeit retailers on its site — with lawsuits.

According to Bloomberg, which was provided with copies of the complaints by Amazon, lawsuits were filed in a Seattle court against a company called ToysNet (this appears to be its Amazon marketplace profile, or what’s left of it) and another called Disk Vision (also known as C New Vision LLC). Both companies, Amazon says, tried to sell counterfeit versions of the “Forearm Forklift.” The other suit accuses two New York residents, Cheng Hak Yung (also known as Joana Wong Ferreira) and Man Hong “Sandra” Chau, of selling counterfeit “TRX Suspension Trainers.” Amazon had to sue them as individuals because, it says, it was impossible to determine the names of their companies due to the defendants’ efforts to conceal them.

Amazon says its brand is tarnished when customers purchase those items from its site or through the marketplace and that it invests millions of dollars into preventing and detecting counterfeit products. But some of the companies it busts and bans from selling on its platform re-emerge as new accounts and continue to sell the counterfeits. In one of the suits, Amazon accuses a company of forging an invoice to prove that the products it was selling were legitimately purchased from the company that made them.

While some of the companies whose products are being ripped off have the muscle to sue the sellers themselves — Apple recently went after a company it claimed was flooding the market with counterfeit iPhone chargers, to the point that 90 percent of the “Apple” chargers Apple purchased were actually fakes — other companies don’t, and have seen sales of legitimate versions of their products fall off as the cheaper fakes move in. Birkenstock is in the process of removing its products from Amazon entirely due to concerns over counterfeit products ruining both its bottom line and its reputation.

Amazon is suing for false advertising, breach of contract, and trademark infringement, among other things. TRX is a co-plaintiff with Amazon in one suit; Amazon is suing the fake Forearm Forklift vendors on its own in the other. This is the first time in Amazon’s history that it has sued its merchants for selling fake items, Fortune reports. It has also sued more than 1,000 people and companies accused of buying and selling fake product reviews.

Forearm Forklifts’ creators were recently interviewed by CNBC about how counterfeiters have hurt their business, claiming that their company is barely hanging on and profits are down because retailers are purchasing what they believe are Forearm Forklifts from counterfeiters who sell them cheaper. Amazon didn’t comment on their complaint for that story, but appears to have made its statement now with the lawsuit.