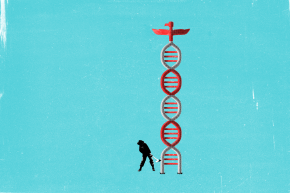 The arrival of Europeans had devastating consequences for the indigenous inhabitants of the Americas, killing anywhere from 50 to 100 million people. The story of European diseases like smallpox wiping out native populations is a familiar one, but now new research offers the most direct evidence yet of the destruction. The effects were felt down to the genetic level.

The Metlakatla First Nation and Lax Kw’alaams, two indigenous communities in British Columbia, partnered with researchers from the University of Illinois and Penn State University to look at genomic evidence spanning thousands of years. The project compared DNA samples from people alive today with those of ancestral remains dating back as many as 6,000 years, including some samples that came from immediately before and after European contact.

“It shows another way to corroborate what we’ve been saying all along,” study co-author and Metlakatla liaison Barbara Petzelt told Vocativ. “With European contact, epidemics such as smallpox went through and devastated local populations, the Metlakatla ancestors.”

Unsurprisingly, genes involved in the immune system showed some of the most significant changes from samples from before and after European contact, though there were also alterations to entire genome of the First Nations communities. European contact massively reduced genetic diversity, or total number of genetic characteristics, in the First Nations populations. That loss of genetic diversity left the population as a whole with fewer potentially beneficial variations of genes, making it that much harder for the population to adapt to an already rapidly changing environment.

“The amount of diversity that was lost was about 57 percent, which is a huge reduction in such a short amount of time,” co-author and Penn State researcher Michael DeGiorgio told Vocativ. ”

More Athletes Compete At The World Games For Indigenous People

While histories of European contact typically focus on how the immune systems of indigenous peoples were ill-equipped to deal with European diseases like smallpox, tuberculosis, and measles, this only tells half the story. The researchers also looked at data from East Asians, whose genomes were shaped by environments similar to those that the ancestors of indigenous peoples encountered before reaching the Americas.

The differences between these populations showed America’s indigenous people had become uniquely adapted to their environments.

“The only way to explain some of the genetic differences would have been the rise of some beneficial mutation in these immune genes once these groups moved into the Americas,” said DeGiorgio.

In other words, the ancestors of the Metlakatla and other indigenous peoples had very robust, successful immune systems prior to European contact. It’s just that the arrival of Europeans and their unfamiliar pathogens presented entirely new challenges.

This study is part of a larger effort spearheaded by lead researcher Ripan Malhi, an anthropologist at the University of Illinois, to partner with indigenous communities in scientific research.

“In the past, First Nations have been looked at as subjects,” said Petzelt. “Ethnographic research, archaeological research, genetic research to an extent. But our relationship with the University of Illinois has actually been more of a back and forth.”

Her hope is that indigenous communities not only assist researchers on their projects, but also that members of the Metlakatla become researchers themselves. To that end, Malhi has run a summer program aimed at teaching indigenous students from the high school to PhD level how to undertake genomic research. DeGiorgio saw such involvement as crucial.

“Indigenous communities come with their own priorities for the types of questions they would like to have investigated. They may come with different perspectives on what the data is actually telling us,” said DeGiorgio.

In this case, the data is clear: Metlakatla and Lax Kw’alaams oral traditions are indeed correct. These indigenous communities have lived on the coast of British Columbia for thousands of years, and the same immune genes that once served them so well in their environment left them terribly vulnerable when Europeans came.

“Now we actually have genetic proof of this,” said Petzelt. “For us, the results are not surprising. The big thing is that science is starting to catch up to what we’ve been saying.”