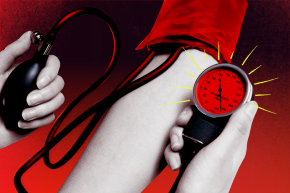 As high blood pressure has exploded worldwide, wealthier countries are actually getting healthier

The number of people with high blood pressure has doubled in the last 40 years, with 1.13 billion people now living with the condition. But the increase hasn’t been felt equally, according to a new study. High blood pressure was once a problem for the world’s wealthiest nations, but now it disproportionately affects the world’s poorest.

“This is the most comprehensive global analysis of blood pressure and the only one to span four decades and various outcomes,” lead researcher Majid Ezzati told Vocativ in an email. “It provides the strongest evidence that taken globally, high blood pressure has shifted from a condition affecting wealthier countries to one that is much higher in poorest countries, due to opposite trends in the two groups.”

About half of the 1.13 billion people live in Asia, with India and China each home to about 200 million people with high blood pressure. Surprisingly, given America’s love of fast food, United States actually has the second lowest rates of high blood pressure in the world for both men and women, behind only South Korea. Joining them in the top five are Canada, Peru, and Singapore.

So what’s driving those divergent trends? Ezzati said people in wealthier countries get their blood pressure measured more frequently, meaning problems are caught sooner, and they have better access to medication than those in poorer countries.

“High-income countries are becoming better at incorporating blood pressure measurement and, when needed, treatment in primary care system, although more needs to be done,” he said. “A lot less is being done in low/middle-income countries.”

It’s not just a question of better medical care, though. People in wealthier nations are typically eating more healthily than they were 40 years ago, if not in terms of quantity of food eaten – obesity is still very much an epidemic – then at least in terms of the kinds of high-sodium foods that are linked with high blood pressure. Ezzati points out that richer nations are more likely to have fresh, affordable produce available year-round and implement regulation or education policies about the dangers of salt.

High blood pressure is more than just an individual medical issue. Its link with heart and kidney disease and early death can have added economic consequences for people and societies already living in poverty. In less wealthy countries, blood pressure tends to affect people at younger ages, translating to extra years or even decades of reduced ability to live and work.

The World Health Organization has set a goal of reducing by 25 percent the number of people with high blood pressure by 2025. If we take this study’s figure, that means reducing the blood pressure of 300 million people in the next decade. It’s a tall order, and if this study is any indication, those who have the least are the ones who need the most help.