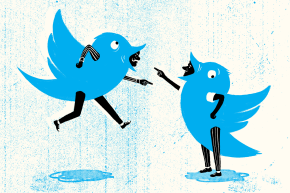 Study: When Women Tweet About Tech, We Think They’re Men
By Allee Manning

Study: When Women Tweet About Tech, We Think They’re Men

We judge the language that we read on social media based on unconscious biases that we hold. And new research published in the journal Social Psychology And Personality Science has identified language markers that influence the way readers stereotype the person behind a tweet. Sometimes accurately, and sometimes not so much. And this stereotyping is most obvious when we’re judging gender.

For one portion of the study, publicly available tweets were gathered and anonymized, then given to over 400 raters tasked with judging what they believed the tweet authors’ genders, ages, education levels, and political ideologies to be — all based on the tweet language alone.

“Our technique was to see if stereotypes are accurate by forcing people to use them,” study lead researcher Jordan Carpenter told Vocativ. “If you’re put in a situation where you have to make a group assessment of someone, and they don’t give you a specific piece of information explicitly about their group identification, then you have to use your stereotypes.”

Stereotypes seemed to be especially prevalent when evaluating gender. The researchers found that specific words influencing perceptions of the writer responsible could be largely tied to subject matter and personality traits typically associated with men and women. Men, it turned out, were more likely to be presumed women when they expressed positive emotions (thus the paper’s title, “Real men don’t say ‘cute'”) or used second person pronouns — i.e. spoke directly to other people. The words most commonly inaccurately associated with women when actually tweeted by a man included “love,” “OMG,” “cute,” and “your.”

Women, on the other hand, were most commonly misidentified as male when their tweets contained words relating to technology or politics.The words most commonly inaccurately associated with men when actually tweeted by a women included “research,” “history,” “sports,” “war,” “news,” and “history.” While men do tend to tweet about tech more often than women, Carpenter noted that “almost ever woman who posted about technology was inaccurately believed to be a man.”

“These inaccurate stereotypes are both harmful and wrong, so I can’t see any reason to defend them,” Carpenter said. “People are using [this stereotype] to draw inaccurate conclusions,” he said, adding that drawing attention to the impact these stereotypes can have may help people consider their biases. “The first step is making people aware, because I don’t think people necessarily know that they were making decisions [based on these stereotypes].”

Because online communication is so common, “building the skills of being able to see where someone is coming from, who they are, and what they want, based on just their social media behavior is really important for people communicating,” he said.