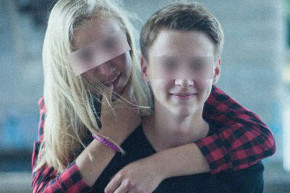 A tragic story of two Russian teenagers is going viral

Russian social media is captivated with the tragic story of two teens who barricaded themselves in an empty house for several hours before apparently committing suicide. The pair streamed the standoff live.

According to the reports on Russian media, 15-year-old Denis and his girlfriend Katya broke into the house of Katya’s stepfather after a family argument. There, they found guns and barricaded themselves inside.

The pair streamed the events via Periscope and posted photos on Instagram, showing guns and half-empty bottles of alcohol. They can be seen firing from the house on police vans and TV crews who’ve assembled outside, laughing and chanting, “Russians do not surrender.”

The disturbing videos and reports from the standoff rapidly exploded on Russian social media as thousands of Russians expressed their shock of the teens’ actions. Many labeled the two “Pskov’s Bonnie and Clyde.” Pskov is the western Russian region where the deaths occurred.

The police say they did not return fire, but tried to persuade the kids to come out. When the pair stopped answering phone calls, authorities stormed the building. The Russian police found the two teens dead “with gunshot wounds,” after storming the house. According to the police the two were found with “distinct signs of suicide.”

Translation: “Pskov’s Bonnie and Clyde: death on the internet.”

One of the final posts sent by the pair was a note from Katya on her VKontakte account, the Russian version of Facebook.

"I love you, but you yourself did not notice how you destroyed my mentality and life. Forgive me all my friends, family and acquaintances. Don't worry, I will leave in a beautiful way. Good luck everyone with your life and please do not be afraid to live the way you want or should live by. Living in pleasure is the best life. I love you."

Police are still investigating the incident.