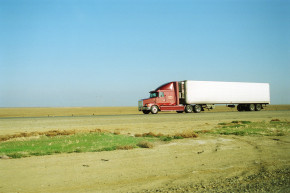 Among the 29 states where truck driver is the most common job, all but three — California, Oregon, and Vermont — voted to elect Donald Trump president.

That’s an industry that may soon be decimated by automation, as self-driving vehicles are becoming more and more common.

There’s no one reason why Trump won an election nearly all analysts agreed he would lose, but a highly touted postmortem explanation, one cited by President Obama, is “economic anxiety” — fear of losing their economic status, or despair that they already have — among working-class Americans who don’t live by the coast.

According to the American Trucking Association, more than 3 million truckers are employed across the U.S., and there’s currently a shortage of labor in the industry. But semi- and fully autonomous cars are a rapidly growing industry of its own in the U.S. and across the world. The U.S. already saw the launch of its first autonomous semi in 2015 and its first autonomous taxis in 2016.

A 2013 Morgan Stanley study estimated that autonomous cars will be adopted far faster in cargo markets than for passengers, and estimated it would quickly save the trucking industry $168 billion a year, with $70 billion of those savings coming from labor. It speculated that fully autonomous trucks would be the norm by 2022, and while the industry would still need plenty of specialists, the industry would drastically cut its labor force.

As recently as 2014, however, trucking was the single most popular profession in 29 different states. That data comes from numbers crunched by NPR, which in turn got it from state employment figures announced by the U.S. Census Bureau, which doesn’t have more recent figures.

Out of those states, only the trio of California, Oregon, and Vermont, among the most reliably Democratic states in the U.S., voted for Democrat Hillary Clinton.

Maine, which counts truck drivers as its most common profession, split its four electoral college votes for the first time in history, with three going to Democratic candidate Hillary Clinton and one going to Trump. (Nebraska is the only other state that does this. Trump won all five of its votes in 2016.) Unlike most states, it awards half its votes to whichever candidate wins the most in the state overall — this year, Clinton — but splits its remaining two for whoever wins each of Maine’s two congressional districts. Trump won Maine’s more rural northern half.

The 25 other states where trucking is the dominant job, remarkably, all voted for Trump. He only won five states — Alaska, Arizona, Florida, South Dakota, and West Virginia — where a different job is more common.