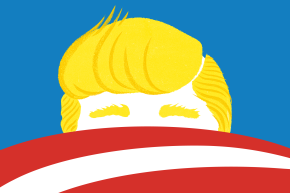 Meet The Obama Voters Who Came Out For Trump

The two men might seem like night and day, but a small coalition of Obama supporters voted for Trump last week

A week out from the election of Trump, the standard narrative around his surprise win looks something like this: Hillary Clinton’s campaign failed to energize the young, diverse coalition that supported Obama, while Trump brought out surprise numbers of white, working class folks. Yet, while there are a host of complicated explanations for Clinton’s loss, it can’t be entirely explained by which side best rallied its base: some Obama voters crossed the aisle for Trump.

At first glance, Obama and Trump seem like night and day: the first black president followed by a candidate who was endorsed by the Ku Klux Klan. A man who rose to the national stage with a speech about how we’re ‘all Americans‘ and then a candidacy that divided people along racial and religious lines. But for some, there was an appeal in the two men’s — albeit different — messages of change.

According to Vocativ’s analysis, of 3,117 counties that voted in this year’s election, there were 180 that supported Obama in 2012 and Trump in 2016. The majority were in Rust Belt states like Wisconsin and Pennsylvania where Trump shifted the electoral map from blue to red, but also as far-flung as California and Florida. To better understand where the overlap, Vocativ spoke to a handful of voters, each of whom supported Trump last week, after voting for Obama in 2012. Here’s what they said:

Trump’s anti-Washington stance echoed Obama’s talk of change:
“I like the idea of change. I like the idea of an outsider,” says Christopher Banas, 56, a vendor management analyst in Jacksonville, FL. “I think Trump can be very vocal, he can be rude, crass, opinionated. But he tends to speak his mind.” For Banas, who says he liked Obama’s “stance on change and hope for America,” Trump’s “Make America Great Again” had a familiar feel. “It’s little bit different than the hope and change that Obama was putting forward, but in the end, we need someone to make some changes and we need to make something happen.”

Trump’s anti-establishment message particularly hit a nerve with voters who bought into the idea that the media, part of the “liberal elite” he’d positioned himself against, was telling them who to vote for. They didn’t like it, and Trump fueled this resentment during his campaign, encouraging rally attendees to lash out at reporters, and saying both Clinton and the media were conspiring against him.

“What caught my eye earlier this year was all the tremendous media violence toward the man, toward Trump,” says Lisa Finkelstein, a 50-year-old social worker and registered Democrat from Tallahassee, FL who supported Obama — and now Trump. “It really turned me off. All the media outlets I used to read and still do, like the New York Times, Washington Post, NPR, the New Yorker, all of them were throwing out this perverted violence against this guy.” She was hardly alone: In October, a Quinnipiac University poll found that 55% of likely voters believed the news media was biased against Trump.

Trump voters found him to be the more charismatic, likable choice:
Finkelstein calls Clinton, “Very hateful, angry, anti. She was never happy, never positive—whereas Trump is very positive. He’s got the girl. He’s the reality show boss, right? ‘You’re fired!’ He’s the guy.” She is part of the 53% of white women who helped elect Trump, unmoved by the “Access Hollywood” tape, the multiple sexual assault allegations against him, or his derogatory remarks about women. “At least Trump is honest,” she adds. “He’ll say, ‘That woman is too ugly.’ It’s honest… I don’t like the shock, ‘Oh, we have misogyny in a candidate like Trump.’ Please.”

Trump’s promises to fight terror and build the economy hit home:
While financial and foreign policy issues are historically high-ranking in elections, there were significant gaps in how much weight Clinton and Trump supporters gave those issues. In July, 80% of Clinton supporters said the economy was “very important” compared to 90% of Trump voters. It was the same story with terrorism (74% vs. 89%) and immigration (65% vs. 79%). While Trump talked about building walls and closing borders, Clinton called for the U.S to do its part in helping Syrian refugees, the majority of which are women and children.

Trump drummed up fears by describing Clinton’s immigration policy as a “Trojan horse” and called for a “total and complete shutdown of Muslims entering the United States” — a declaration still posted on Trump’s website.

It’s not only fears about being attacked — Rob Holmes, CEO of a Dallas-based detection agency who lives in Marina del Rey, CA and voted for Obama, says he’s fatigued by U.S. involvement in conflicts abroad. He became a Trump supporter during the GOP debates, and says he believes the president-elect will focus on issues at home. “Trump’s message is, ‘America First,’” says Holmes, 46. “I believe he’s going to leave some of those foreign wars to foreign places.”

While progressives are worried about the future of issues like gay marriage and abortion, Finkelstein says she doubts Trump will dial back rights. But after a 60 Minutes interview where Trump said he would appoint pro-life judges to the Supreme Court, fears about reversing years of human rights’ work aren’t unfounded. What could more immediately be on the chopping block is the Affordable Care Act — a move Banas, who originally supported Obama’s promise of healthcare reform, wouldn’t mind. “I think we would have been better off having an open system rather than a government-mandated system,” he says. “My healthcare costs went up tremendously, and a lot of people I know, it did for them as well.”

Now that he’s been elected, Trump says that he may end up keeping parts of the ACA, including protected coverage for people with pre-existing conditions, which he called one of the plan’s “strongest assets.” In reality, what he’ll do or not do once in office is still a big question mark, given his history of flip-flopping on issues.

Holmes says he is “a little nervous” that Trump will become part of the establishment, the way he thinks Obama has. He’s already disheartened by reports that the President Elect is looking at his campaign finance chairman, Hollywood producer and former Goldman Sachs partner Steven Mnuchin, for Treasury secretary.

“I did some research him and I was like, ‘Oh my God, he’s from Goldman Sachs,” says Holmes. “I’m thinking, Oh Geez.” Like the rest of Americans, Holmes is now waiting to see what a Trump presidency will actually look like. He has some reservations about Trump’s ability to rein in his emotions, but mostly he wants to see a shakeup in Washington. Although who knows? “He may just compromise,” says Holmes. “But I’m hoping he stays true to his message.”

Editor’s note: After publication, Vocativ removed a source from this story who had misrepresented himself to our reporter.