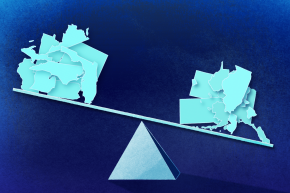 A State-By-State Guide To How Much Your Vote Counts

‘One person, one vote’ is one of the cornerstones of our democracy. But, as Tuesday’s election shows, that’s not quite how things work these days.

Case in point: Hillary Clinton lost the election and also received hundreds of thousands if not a million more votes than her opponent, future president Donald Trump. That outcome, because the presidency is decided by the Electoral College, has happened four times before, most recently in 2000 when Al Gore lost the election to George W. Bush despite also winning more votes.

Clinton’s loss drew renewed attention to our not-entirely-democratic voting system — with many calling for the electoral college to be abolished or overhauled. And one prominent academic crunched the numbers to show just how lopsided the system has become.

In a blog post aimed at showing “unequal voting power of U.S. citizens in presidential elections,” Harvard Law professor (and briefly, 2016 presidential candidate) Lawrence Lessig compared electoral votes held by each state to its population to highlight the discrepancy.

Voters from Wyoming, Alaska, and Washington D.C. may feel their collective vote counts for less given the fact that each voting bloc is only represented by three electors. But it turns out their individual ballots counted for far more last week. Though each of these three voting blocs only account for three electoral votes (out of 538), voters registered here receive the highest percentage of electoral votes per human voter. Voters in Florida, North Carolina, and Virginia, on other hand, ranked lowest in electoral college representation per voter.

While we’re talking about differences observed in the millionths decimal place in looking at electoral college representation per voter, it’s not insignificant on the grand scale: this means that a Wyoming voter had almost four times as much voting power as a Floridian voter.

Dissatisfaction with the Electoral College has piped up again around this election, but it’s nothing new. According to a Rasmussen Report poll published before last Tuesday’s vote, the majority of surveyed Americans feel that the Electoral College should be disbanded in favor of a true popular vote.