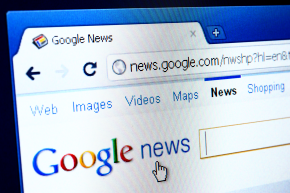 Google Has A Fake News Problem, Too
By Sara Morrison

Google Has A Fake News Problem, Too

While Facebook continues to grapple with the its inability to stop hyperpartisan websites from spreading fake news to its users who would rather share a meme about Hillary Clinton using an earpiece than a nuanced, in-depth look at the pros and cons of both candidates, it can take heart that it is not alone. Google has some fake news promotion problems of its own.

Twitter user Robert McNees noted on Monday morning that a WordPress blog claiming that Donald Trump won the popular vote appeared on the top of Google News if you searched for “final election results.”

Now @google is bumping fake news to the top of its search results. Clinton is ahead by at least 800k in popular vote; closing in on 1million pic.twitter.com/5vtN8FZfOP

Lest you believe these are just the ramblings of a random person on Twitter, the Washington Post got the same result.

The article’s numbers are off by quite a bit; according to the vote tally on CNN, which is a real news source, Clinton is not behind by 700,000 votes but is leading Trump by about 670,000 votes, and there are still votes left to be counted. On Sunday, amid pushback, the blog posted an update saying it got its vote tally “from twitter posts.” Unattributed, unverified news “from twitter posts” is what people saw when they searched Google News for facts, and an unknown number of them came away from it incorrectly believing Trump won the popular vote.

Google’s error made for a change of pace after Facebook has drawn so much fire over the past several days for being a major source of fake news during the election. While Google has generally done a good job of keeping fake news sites and stories from reaching its Google News page, even Macedonian teenagers know that fake stories on Facebook are lucrative because there are few measures in place on that platform to identify them as hoaxes and stop their spread to hundreds of millions of users. They’ve created Facebook pages with hundreds of thousands of followers and their posts link back to websites on which they sell ads.

Fake articles occasionally appear on Facebook’s “trending” bar as well, further spreading misinformation and giving those stories the hint of legitimacy by virtue of Facebook’s algorithm (Facebook fired the human curators and editors several months ago) deciding that they are a “trending topic” and placing them prominently in front of desktop users’ eyes.

While Facebook hasn’t said much publicly about fake news appearing in its trending bar or what, if anything, the spread of false information on its platform had to do with the outcome of the election, its founder and CEO Mark Zuckerberg recently addressed some of the outcry by saying that there was a “very small amount” of “fake news and hoaxes” on the site but that the site was working on possible solutions. According to a Gizmodo report published on Monday, Facebook was working on a tool that would identify fake news stories earlier in the year but shelved it because right-wing sites were disproportionately affected (this lines up with many fake news site purveyors’ assertions that right wing fake news generally got more engagement than the left wing fake news, so that’s where they focused their efforts) and Facebook didn’t want to be seen as biased. Facebook has denied this report.