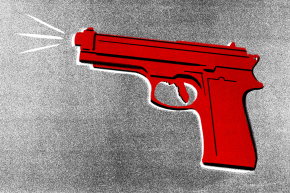 Homicide Rates Went Up In Florida After Stand Your Ground

The biggest increases in the homicide rate occurred among whites, young adults, and men

Florida passed its stand your ground law in 2005, giving legal immunity to people who use deadly force in response to a perceived threat. As soon as the state did so, homicide rates shot up, according to a new study. And while that doesn’t necessarily prove the law caused the increased homicide rate, one researcher argues we ought to act right now on that assumption.

Utah was the first state to pass a version of the stand your ground law in 1994, but no state has been more closely or infamously associated with the law than Florida. The fatal shooting of Trayvon Martin by George Zimmerman in 2012 brought international attention to the state’s self-defense laws (although, yes, stand your ground ultimately didn’t form part of Zimmerman’s legal defense). And while Martin’s death served as a flashpoint for the controversy, an international team of researchers wanted to see what the immediate effect of stand your ground was after then Governor Jeb Bush signed it into law.

Not everyone in Florida felt the effects of the new law equally. The homicide rate increased most sharply among whites, people aged 20-34, and men. That said, while the immediate increase in the homicide rate was greater for white people than for black people, the latter group has seen a higher average number of homicides per month in the decade following the law’s passage. So though the immediate effect was less pronounced for black people, there’s evidence in the data to think they have been more affected in the long run.

A study like this can’t technically prove that the passage of stand your ground caused the increase in the homicide rate, but co-author and University of Pennsylvania researcher Douglas Wiebe said it’s hard to explain these increases in the homicide rate right after the law goes into effect.

“We know of no other event abrupt or gradual that happened around the same time that could help explain why we see such abrupt and profound increase in homicide in Florida,” Wiebe told Vocativ. The researchers tested this by looking at suicide rates from the same time period. Those rates were unchanged, indicating the issue was specifically with the homicide rate.

As to why the law was linked with such increases in homicides – beyond the obvious answer that there were now more situations where people could use deadly force without expecting to face legal repercussions – Wiebe speculated the media attention the law received led to the sudden shift in behavior. People knew about stand your ground, and they adjusted how they acted accordingly.

“This is a law that has received a lot of attention and the public are likely aware of the change in the law,” said Wiebe. “And after it was understood that this no duty to retreat clause was extended beyond the home, so that now people while in public if they felt threatened could use deadly force to defend themselves. Evidently that led to more interactions where people did exactly that.”

Since Florida joined Utah as the second state to pass a stand your ground law in 2005, nearly half of the remaining states have followed suit. Eighteen other states still have explicit duty to retreat laws, where people are required to leave a situation when they feel threatened and may not use deadly force. The remaining states have self-defense laws somewhere in the middle of these two sides.

Wiebe acknowledged that people might well argue with the contention that the stand your ground law caused the homicide rate to spike, but he said Florida – and the 22 other states with similar laws – can’t afford to take the risk when the circumstantial evidence is so compelling.

“People are dying because of this that otherwise wouldn’t,” he said. “What can we do about it? It makes sense to repeal the law. I would expect then that fewer deaths would happen, and if we saw that that would be our further evidence that what we are seeing here is in fact a result of the stand your ground law.”

Of course, if it turned out repealing the law had no effect on the homicide rate, then a different solution would be needed. But Wiebe argued this isn’t just some theoretical question that can wait until we are 100 percent sure of what’s going on, because more people are dying with every month the issue goes unaddressed.

“This is a medical and a criminal justice and a health problem that we should work hard now to ameliorate,” he said. “There is an abundance of evidence here suggesting an explanation for what happened and we have enough evidence to try to act now in the benefit of the public good.”