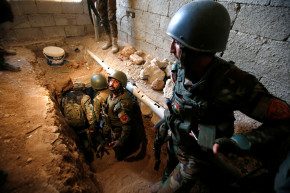 The Islamic State is offering a financial reward to any soldier who can successfully deploy chemical weapons on the battlefield, a trove of newly discovered documents show.

ISIS is offering up to 10 silver dirhams — or about $5 USD — to those fighters that use rockets or mortars to unleash mustard gas, chlorine, and other nerve agents against its enemies, according to financial records reportedly reviewed by Britain’s Sky News. Aymenn Jawad al-Tamimi, an expert on the terror group and its bureaucracy, told Vocativ that the documents appear to be authentic.

The cash bonus is part of a detailed rewards system used by militant leaders to incentivize its rank-and-file soldiers, who continue to sustain heavy losses and face sweeping military setbacks across Iraq and Syria. Fighters currently receive a mere $50 month, plus additional compensation for spouses and children, al-Tamini said, making such an offer all the more enticing.

Sky News reported that the records were found by Kurdish Peshmerga forces in Bashiqa, an Iraqi city near Mosul that ISIS controlled until last week. While extra money could spur an increase chemical weapons use by ISIS militants, leaders are offering even more more for specific targets, according to the records.

The documents, dated from July 14, 2016, also show that an ISIS fighter or his unit could receive 10 gold dinars (around $1,400 USD) for downing an enemy aircraft and seven dinars (around $1,000 USD) for destroying a tank. Picking off a sniper could fetch as high as one dinar (around $145 USD), provided there was video evidence of the kill.

There is also apparently little incentive for ISIS soldiers to capture alleged apostates or enemy combatants. They’re only worth a single silver dirham, or roughly 50 cents.

The gold dinar and silver dirham are currencies minted by ISIS and intended to be used across its self-declared caliphate. Vocativ based its U.S. dollar estimates for the coins on online brochures the terror group published back in 2014, which said a one dinar coin would weigh 4.25 grams and be made of 21 karat gold while one dirham would weigh 3 grams and be made of silver.

ISIS has allegedly stockpiled ammonia and sulfur in civilian areas near the city of Mosul, possibly for use as chemical weapons, a United Nations spokeswoman said last week. In recent months, the terror group has also fired chemical munitions at U.S. troops in Iraq, according to the Pentagon.