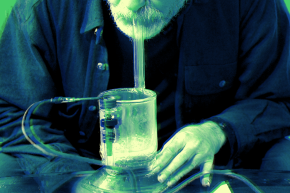 The Bongfather: Using Science To Get The Perfect Hit
By Shane Dixon Kavanaugh

The Bongfather: Using Science To Get The Perfect Hit

Portland, Oregon's Dave Goldstein has spent a lifetime advancing the cause of better bong rips. The Rooster Apparatus is his best invention yet

Dave Goldstein has advanced the cause of better bongs since Ronald Reagan was in the White House. But it was a rip from one of his latest inventions, back in April 2011, that would cement his name in annals of cannabis culture.

“My eyes kind of rolled back in my head. I was like, ‘Oh my God. This is the best bong hit I’ve ever had by a whole quantum level,'” recalled the 58-year-old glass blower and lifelong toker. Astonished, he quickly took a second hit. It was just good.

Goldstein then had a revelation. “I was like, ‘I need a patent attorney.'”

Goldstein’s creation blended laboratory science with the bong-making craftsmanship he honed over the course of 30 years. Calling it the Rooster Apparatus, his new water pipe technology centered around a fritted disc — a filter made from incredibly fine glass that’s able to remove particulates from vapor that passes through it.

Chemists use fritted discs to purify gas, something Goldstein learned while working at the University of Maryland’s laboratory glass shop — and shortly before Oregon’s relatively lax weed laws lured him to Portland in the early 1980s. For stoners, a fritted disc means a dangerously smooth bong rip that comes with fewer carcinogens, stacks of milky white bubbles, and a mind-melting payload of THC.

The Rooster earned a U.S. patent in 2015 (technically it’s for ‘tobacco use only’) and has attracted a kind of cult following online, with hundreds of marijuana fans posting videos that show the bong at its peak performance. The enthusiasm on social media, while flattering, is something Goldstein struggles to wrap his head around.

“I think it’s a generational thing and I can’t claim to understand it,” he said.