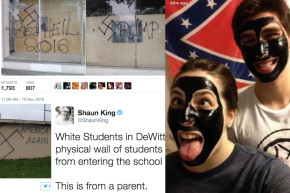 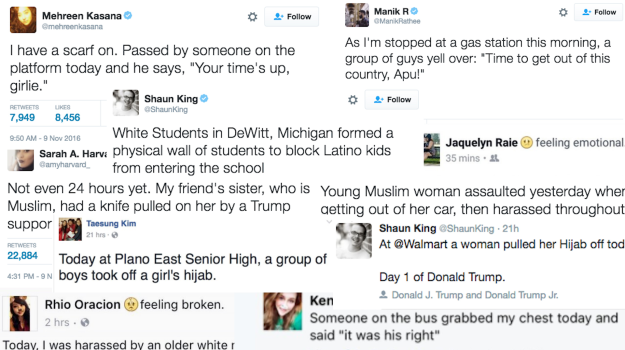 In the days after Trump’s surprise election, violent anti-immigrant and Islamophobic hate crimes, assaults and acts of vandalism are being reported on social media. One journalist, Shaun King of New York Daily News, says he alone has received “a few dozen reports per hour,” which he has retweeted.

In Philadelphia, the windows of a local store were vandalized the words “Seig Heil 2016” and “Trump” with a swastika in place of the letter “T.”

At Plano East Senior High in Texas, the school is investigating a series of Trump-inspired crimes, particularly graffiti of “Build That Wall” and a gun threat on campus. A Muslim student at that school tweeted that a group of boys had torn off her head scarf.

White students at a high school in DeWitt, Michigan reportedly formed a “wall” to block non-white students from accessing their lockers, and chanted racist slogans in the hallways.

These incidents are just a few of the many that have been reported — and for many, indicate their worst fears of America under a Trump presidency may be coming to life.