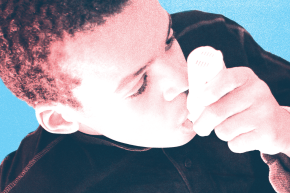 The findings fit with previous studies linking "food deserts" with higher risks of diabetes, hypertension, depression, and other health issues

Whether they want to believe it or not, kids need to eat fresh fruits and vegetables. But what some kids consider an annoyance is for other kids a near impossibility, as millions of children nationwide live in food deserts — places where fresh food just can’t be found. And, according to a new study, living in a food desert can significantly increase a child’s risk of having asthma.

The precise definition of what a “food desert” is can vary, but the researchers in this case viewed a food desert as anywhere that is at least one mile from the nearest supermarket. It’s not that food deserts are completely bereft of food, but convenience stores and corner shops typically have lots of low-nutrition, produced items and few of the fresh fruits and vegetables needed for a balanced diet.

“It is worth it to make it to a grocery store or farmer’s markets to find fresh fruits and vegetables,” allergy researcher Dr. DeVon Preston told Vocativ in an email, acknowledging that simply making the extra effort to go to a supermarket isn’t the only challenge. “It is difficult since fresh foods often do cost more and the time to cook/prepare those foods may not be conducive due to employment and socioeconomic status.”

Preston and fellow researchers at the University of Virginia Health System looked at health data for 2,043 kids between January 2014 and March 2015 in the Hampton Roads region in southeastern Virginia. They found that about 10 percent of the kids lived further than a mile away from a supermarket, and that these kids had a higher rate of asthma than their peers. The difference might not appear huge at first — 17 percent of kids living within a mile of a supermarket had asthma, compared with 21 percent living further away — but the difference became more stark when the researchers factored out other health conditions that are linked with asthma.

Once they controlled for obesity and hay fever, the researchers found that kids living in food deserts had a 53 percent increased risk of asthma compared with other children. The findings fit with previous studies linking food deserts and food insecurity with higher risks of diabetes, hypertension, depression, and other health issues. That’s not to say the precise nature of these links have been definitively established — particularly when food deserts are as much a symptom as a cause of deeper racial and socioeconomic disparities.

Preston encouraged those dealing with asthma to make sure they take their prescribed medications and get regular exercise along with eating more healthily. Those are important because being overweight or obese is also linked with higher rates of asthma. But why would asthma in particular be linked to living in food deserts? Preston said he could be related to how processed foods are prepared compared with their fresh counterparts.

“Fast food and convenience store foods typically are highly processed and as a result, are sterile,” he said, “while grocery store food, namely the fresh fruits and vegetables, likely still have the natural bacteria and fungal elements. This may show that the microbiome could be implicated in the development of asthma.”

That connection between the bacteria in our bodies, the food we eat, and the medical conditions we deal with is something Preston hopes to investigate further.

“In addition to looking at how food may be affecting the development of asthma, I think there needs to be more research into the types of food we eat and the chemical consequences they may have,” he said. “But that is something that will likely be a bit far in the future.”