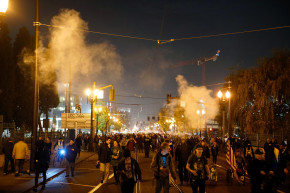 It’s Friday, and Donald Trump is still our soon-to-be president. In some of his first tweets since winning the election — and the first to address the widespread discontent from the people who did not vote for him and cannot conceive of a future with him at the helm of the United States of America — Trump showed that not much has changed with regards to his social media strategy. Also, it seems that he got control over his Twitter account back, for now.

Just had a very open and successful presidential election. Now professional protesters, incited by the media, are protesting. Very unfair!

Love the fact that the small groups of protesters last night have passion for our great country. We will all come together and be proud!

Both tweets came from Twitter’s android application, which, we believe, indicates that Trump himself posted the tweets. (Tweets sent from his account that have things like hashtags and photos and other evidence that they are being composed by someone with a reasonable grasp of Twitter basics are usually sent from an iPhone, and generally believed to be a staffer and not Trump.) So it doesn’t look like Trump sent the more childish, earlier tweet that blamed “professional protestors” and “the media” for “very unfair” protests and then someone else took the wheel for the diplomatic second tweet that attributed the mass discord to passion. It may well have been Trump himself who had a slight change of heart overnight or at least figured out in the cold embrace of the morning that it’s not very presidential to say “very unfair!” when people are mad at you.

Meanwhile, that “small group” of protestors turned into what Portland police dubbed a “riot.” At least 26 people have been arrested, and there were reports of vandalism and unlawful assemblies across the city. Police said they used “less lethal munitions” to try to control the crowds, including pepper spray, “rubber ball distraction devices” and firing rubber bullets.

Thursday night marked the second night of anti-Trump protests across the country, and probably will not be the last. Very unfair!