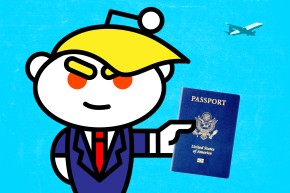 Trump Subreddit Is On A Mission To ‘Make Europe Great Again’

Moderators of the /r/The_Donald issued a call to its more than 280,000 subscribers to join other subreddits for the EU's far-right politicians

The largest Donald Trump subreddit community is calling on its members to help far-right politicians across the pond “Make Europe Great Again.”

Moderators of the /r/The_Donald on Thursday issued a call to its more than 280,000 subscribers to join other subreddits that focus on politicians who are part of the continent’s far-right movement, including France’s Marine Le Pen and Britain’s Nigel Farage, a key figure in the country’s vote to leave the European Union this summer.

The post, which went live around 12 pm ET while President Barack Obama was meeting with Trump in the White House, urged /r/The_Donald subscribers to “show some support for other politicians trying to wake Europe up!” and do “some more meme magic.” The call to action included at least 11 links to fairly new subreddits dedicated to leaders the EU’s far-right parties, some of whom are holding elections this year.

Comment from discussion MAKE EUROPE GREAT AGAIN! Check out our sister subreddits to show some support for other politicians trying to wake Europe up! We need some more meme magic folks!.

In the subreddit for Le Pen, who is the leader of France’s conservative National Front party, a post in English greets the “veterans” of /r/The_Donald and lists ways in which subscribers can help. The post calls on subscribers to “Translate in French the memes that worked well in the US. For instance …’Crooked Sarkozy for Prison.’” and to “Make fun of François Hollande,” France’s president, who they compare to Jeb Bush. The post also calls for international donations to Le Pen’s campaign.

While the r/Le_Pen subreddit is in both English and French, other subreddits which are dedicated to far-right leaders in Austria and the Netherlands, where elections are scheduled in coming months, are mainly in English. Hours after the call was posted on /r/The_Donald, thousands of followers subscribed to the various subreddits and are already spreading the infamous trolling tactics that dominated social networks during the U.S. presidential election campaign.