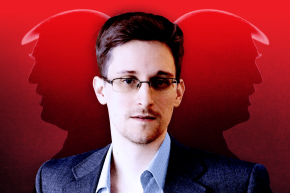 Snowden Relatively Unconcerned About Privacy Under Trump
By Kevin Collier

He has major hangups, of course — but doesn't see the president-elect as a unique threat

Many privacy advocates are suddenly more terrified than ever because Donald Trump will soon be in charge of the NSA.

But Edward Snowden is not one of them.

Speaking Thursday in a livestreamed panel discussion, the former National Security Agency systems administrator, who leaked scores of agency documents to journalists in 2013, said that Trump was less a threat to people’s privacy than governments at large.

“I try not to look at this as a single election or a single president, or even a single government,” Snowden said. “We see these threats coming across borders.”

He noted that despite a rising awareness of global internet surveillance programs, governments around the world are rapidly ramping up their legal authorization to do so, from a sweeping new Chinese cybersecurity law, to the U.K.’s proposed “Snooper’s Charter,” to the new so-called Big Brother Law in Russia, where Snowden has had asylum since 2013.

Plenty of privacy activists have expressed horror at the idea of Trump able to control the most powerful surveillance apparatus in the world, with some going so far to beg President Obama to shut some of it down before Trump takes office.

But Snowden insisted on a more wholistic view of how to defend privacy — one without an easy or immediate solution.

“What we need to start thinking about now is not how to do we defend against a President Donald Trump, but how do we defend the rights of everyone, everywhere without regard to jurisdiction, without regard to borders,” he said. “You should not have to study to be safe using the devices you rely upon every day. And this means you have to be political. You have to talk about these sort of things.”

That said, he did reiterate a common refrain amongst privacy advocates: to communicate with the chat application Signal, which encrypts all users’ communications, and to browse the internet with the Tor browser, which can hide a user’s identity by rerouting their connection before visiting to a website.

Tor, Snowden said, “won’t give you perfect security, but you will be far safer than if you were using a normal Internet Explorer or Chrome or Firefox browser.”