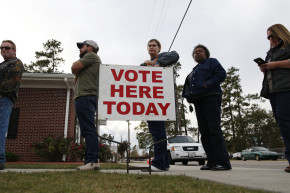 No, Voting Rights Restrictions Did Not Cost Clinton The Election
By Shane Dixon Kavanaugh

No, Voting Rights Restrictions Did Not Cost Clinton The Election

But they did just impact hundreds of thousands of voters

Voters faced prohibitive ID laws, curtailed early voting programs, and hundreds of closed or changed locations of polling sites in a presidential election that saw states take new — and unprecedented — steps toward voter restriction. There were 85-year-old women who were not allowed to vote because of an expired driver’s license. There were black men who traveled to three different places before being able to cast a ballot.

All told, 14 states, nearly all of them Republican-dominated, had new voter restriction laws on the books leading up to Tuesday’s White House contest. Meanwhile, counties and other jurisdictions elsewhere enacted measures that have raised concerns for voting rights advocates.

While Donald Trump made bold claims about an election rigged against him, election law experts say many of these new rules disproportionately affect racial minorities, a group that tends to vote Democratic. However, it appears unlikely that the surge of changes in voting rules cost Hillary Clinton the election, as some liberals have suggested.

“It is a big empirical leap to claim that these cutbacks caused the losses for Democrats in states that mattered for the outcome of the electoral college,” wrote Rick Hasen, a professor at the University of California, Irvine School of Law and author of the Election Law Blog.

Instead, a more probable culprit of a Clinton defeat is the fact that, as of publication, she earned 7 million fewer votes than Barack Obama did in 2012. Enthusiasm among Democrats cratered in a number key battlegrounds states where voter suppression was not a grave concern. In Pennsylvania, Clinton attracted 146,000 fewer voters than Obama did in 2012. In Michigan, she was down over 322,000.

In other states, however, observers argue that new voter restriction initiatives may have helped Trump eek out a small victory. Critics of Wisconsin’s new voter ID law, signed by Republican Governor Scott Walker, believe it may have blocked as many as 300,000 people from voting. Meanwhile, reports of voter disenfranchisement in the state were rife on Election Day. In the end, it appears Trump carried Wisconsin by 27,000 votes, a state Obama won by more than 200,000 in 2012.

The flurry of activity, in Wisconsin and beyond, came during the first presidential since the Supreme Court gutted key sections of the Voting Rights Act. Part of the historic civil rights legislation, passed in 1965, mandated that the federal government oversee election law in states with histories of voting discrimination. In 2013, the high court’s conservative justices struck down this provision, known as Section 5, paving the way for these problematic states — and others — to enact voting changes that are potentially discriminatory.

In jurisdictions once monitored under the Voting Rights Act, voters saw at least 868 fewer places to cast ballots in 2016 than four years before, according to a study published by the Leadership Conference for Civil Rights. Many of these shuttered polling stations fell in areas with high concentrations of poor and minority voters, forcing some individuals to travel as far as 25 miles to vote, the survey found.

The decrease in some states was staggering. Polling places in Arizona’s heavily-Hispanic Cochise County, for instance, plummeted by 63 percent since the Supreme Court’s ruling, the highest concentration of polling place reductions in the country. Before the 2013 Supreme Court decision, the county would have needed federal approval for the closures because of Arizona’s history of voting rights discrimination.

Arizona voters also faced a number of other hurdles on Election Day, said Chris Carson, the president of the League of Women Voters, a national civic organization that closely monitors elections. “It was a mess,” she told Vocativ. “A lot of last-minute polling place changes. Long lines. Students getting misinformation on polling sites.”

Republican-run election boards in North Carolina drew headlines after they scaled back early-voting sites, a move that critics claimed was an effort to suppress black turnout. Whether it was low voter enthusiasm or the newly enacted impediments, early turnout among black people fell by 8.5 percent, which the state’s Republican party called an “encouraging” sign before Election Day.

“How many people were turned away from the polls?” asked Ari Berman, an investigative reporter who covers voting rights issues. “How many others didn’t bother to show up in the first place? These are questions we need to take far more seriously.”