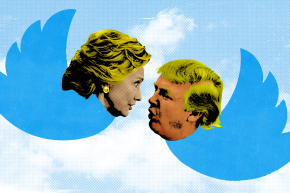 Both candidates developed massive Twitter followings during this election. But Trump leveraged his in a way Clinton couldn't

Every major election forecast predicted that by the time the United States went to sleep Tuesday night, Hillary Clinton would be preparing to deliver her acceptance speech. But Donald Trump won. What happened?

As late as 10:20 p.m. ET, the New York Times assured readers that Clinton had an 85 percent change of winning. The Huffington Post still believed Clinton’s chances were 98 percent by 12:43 a.m. Wednesday, a couple of hours before Trump reached the 270 electoral votes he needed to win. Even FiveThirtyEight, the biggest skeptic of the lot, gave Clinton a 72 percent chance of being the one to take the oath of office in January.

Plenty of people have already pointed out why the polls were wrong. Back in January, former FiveThirtyEight journalist Mona Chalabi wrote in the Guardian that polls are a flawed indicator of how people will vote on election day, not least because people change their minds. The Atlantic noted that forecasts are still mired by unreliable data. Take FiveThirtyEight’s false prediction that Clinton was to win Pennsylvania with 77 percent of the popular vote: One of the polls that forecast relied on was conducted by SurveyMonkey, which obviously ignored all residents without internet access.

We know now that the polls were wrong, but there was another metric right in front of our eyes that forecasters should have considered: social media. Trump’s domination of Twitter started early, and provided evidence that the Republican nominee was here to stay long before polls began returning the same result. Before Trump announced his candidacy at Trump Tower on June 16, 2015, he was polling at just 2 percent. It look him just two weeks to poll higher than everyone else on the GOP card, a position he held onto for the remainder of the Republican primaries. Before he uttered a word on June 16, however, Trump already had 2.6 million Twitter followers, far more than any other would-be Republican candidate. Users mentioned his name almost 800,000 times on the day of his announcement, a solid lead over the 600,000 who tweeted Hillary Clinton’s name on April 12, when she announced her candidacy. That was despite Clinton having more followers. But Trump’s Twitter amounted to so much more than a slight lead in followers over his biggest rival.

Trump’s followers were not only present in greater numbers than Clinton’s, but behaved differently, too. David A. Beirne, who tweeted the hashtag #MAGA, an abbreviation of “Make America Great Again” dozens of times a day in the final weeks before election day, explained why he spent so much time talking about the Republican nominee. “My philosophy is, this guy is sticking his neck out to bring a lot of stuff forward that people don’t want to talk about, the least I can do is fight against what I have seen as an attempt to silence or censor his supporters, consistently to no avail,” he told Vocativ on Twitter.

Beirne, 29, from Santa Ana, California, said he voted for Obama in 2008 and 2012, and even interned for a Democratic senator, before his views shifted. The substitute teacher and grad student said he joined Twitter in October, and found encouragement in the platform’s loyal community of grassroots Trump supporters. “The level of community on Twitter is crazy, and that’s what sucked me in a couple weeks ago…It all seems totally grassroots. The average person who retweets me is probably middle-aged (all races, but majority white) with maybe a 100 or so followers. Just people who seem to really be engaged.”

That loyalty was clear throughout Trump’s 17-month campaign, even though Clinton’s Twitter account posted more often than he did, tweeting 9,513 times between June 16, 2015 and election day, versus Trump’s 9,453 tweets during the same dates. One of the best examples of this happened on September 9, when Clinton said: “You could put half of Trump’s supporters into what I call the basket of deplorables.” The hashtag #basketofdeplorables became the biggest hashtag of the election, with 900,616 Twitter mentions in the first 24 hours, but not because of Clinton voters. Its popularity was overwhelmingly tied to Trump supporters, many of whom placed the word “deplorable” in front of their username, proudly taking ownership of the insult, and using it as a rallying cry against Clinton.

Clinton’s Twitter followers attempted similar power-grabs. After Trump described Clinton as a “nasty woman” during the final presidential debate on October 19, some Clinton supporters added the phrase before their Twitter usernames. Others replaced their usernames with the phrase entirely, and some mentioned it in their Twitter bios. But a smaller number of users got on board with the idea, and failed to organize as effectively as Trump’s did.

That was a reoccurring trend during the election. Vocativ analyzed mentions of #ImWithHer versus #MAGA or #MakeAmericaGreatAgain during and between the three presidential debates, and discovered Trump’s hashtags consistently out-performed Clinton’s. #ImWithHer enjoyed brief spikes during all three debates, and actually overtook Trump’s during the first and third events. But mentions of that hashtag were never as consistent as #MAGA or #MakeAmericaGreatAgain between debates, proving that Clinton’s followers lacked the same level of dedication; however, that’s counting the approximately 10 percent more bots that have been tweeting in support of Trump over Clinton.

Just why do Trump’s supporters behave so differently than Clinton’s? According to Michael Cohen, adjunct professor at The George Washington University in Washington D.C., and chief data scientist of the school’s Public Echoes Of Rhetoric In America (PEORIA) project, it’s down to how the candidates themselves used the platforms.

Cohen told Vocativ in a phone call: “When you look back on Trump’s Twitter, the reason why it was so powerful is because it was authentic. It really felt like it was him, and in many cases, it was…You really felt that you were having some kind of interaction with that person, and that that person was real. Whereas with Clinton, you never felt that she was real.” Trump told CNN’s Anderson Cooper in April that he comes up with almost all of his own tweets, even if that sometimes means yelling them at one of his staffers, who then posts what he says. Clinton’s Twitter account, on the other hand, notes in her bio that “Tweets from Hillary signed –H,” and as the PEORIA project reported, means she only wrote 124 of her own tweets between February and August.

For this reason, Trump’s Twitter was a clear extension of his campaign. “You can say what you want about Trump,” Cohen said, “but nobody ever questioned whether or not it was him. In a year where people are just fed up of politics…enough were fed up enough to look at this and say, you know what? I want a real person there.”

Trump’s Facebook page had a similar following to his Twitter by election day, but it was clear from reading the posts that fewer were authored by Trump himself. And yet it didn’t matter. Regardless of the social media platform, Clinton mostly kept her distance. The biggest tweet of her entire campaign, when her account tweeted “delete your account” at Trump after he tweeted that President Obama had endorsed “Crooked Hillary,” the tweet wasn’t signed “–H,” suggesting she didn’t even write it.