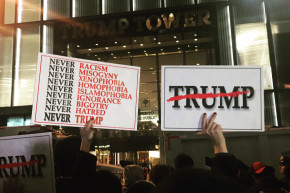 The Night After: Anti-Trumpers Gather In Shock And Sadness
By Ryan Beckler

The Night After: Anti-Trumpers Gather In Shock And Sadness

People reeling from Donald Trump’s unforeseen victory gathered across America Wednesday night. Some to express anger, some to lament their sorrows, some to hope for better days ahead. Most came looking for signs of societal unity when much of the past 24 hours had been spent in division.

One of the earliest protests kicked off at the University of Texas, where hundreds of students marched in protest from campus to the State Capitol building in Austin. As the day wore on, protests began sprouting up in cities and at universities across the country, including in California, Seattle, Chicago, Boston, Washington, D.C., Philadelphia, and New York. Many carried over into the early hours, and were continuing as of early Thursday morning.

In Austin, the seat of Travis County, where Clinton won with 66.3 percent of the popular vote, one Mexican American junior student, Gerardo Davila, watched as protesters marched downtown, blocking a bridge. Davila said Trump’s win made him fear for friends who are on visas. “I don’t know if mass deportations are gonna happen, but they seem pretty worried.”

Davila believes that Clinton’s shocking defeat means that the bigoted views expressed by some Trump supporters have been vindicated. “I have Indian and Arab friends who have been getting racial slurs yelled at them, they’re really scared. People feel more entitled to do stuff like that now because they’re emboldened by our new president.”

“Not my president” #dumptrump #notmypresident

In New York, a state where Clinton won 58.9 percent of the vote, around 10,000 protesters gathered outside Trump Tower on fifth avenue and 56th street in Manhattan. Loaded dump trucks lined two blocks to protect the home of the president-elect. Earlier, around 5,000 people had marched around 40 blocks north from Union Square, and more came from Columbus Circle next to Central Park, blocking traffic as they held signs with messages like “Dump Trump.” They chanted “Not my president,” “F**k your tower, f**k your wall,” and “F**k Mike Pence,” referring to the Indiana governor and Trump’s running mate.

One protester, Ericka Longo, a student at SUNY Purchase, said: “The last 24 hours has been a lot of crying, a lot of consulting. My professor just openly cried in class today and said, ‘let’s talk about this’.” Longo said she had attended the protest “to show that we will peacefully protest and we do not stand for misogyny, bigotry, racism, and sexism, and all these f**ked up things in the world.”

Images posted on social media showed protesters burning an American flag. Others confronted the NYPD, who had assembled a large presence at the protest, asking: “Who do you serve? You’re supposed to serve us, not him!” On Wednesday night, the NYPD said they had arrested 15 people. However, protests appeared largely peaceful.

Another protester outside Trump Tower told Vocativ she was certain Hillary Clinton would win, as most polls had suggested. Tessa Gourin said: “I’m in pure shock. It’s not real life. I feel like I’m in a dream.” The woman worries that a Trump presidency will undo much of the progress the country has made on social justice issues. “Gay marriage is legal everywhere, abortion is a choice, trans people are much more accepted. It’s such a smack in the face.”

As thousands of people surrounded her, their chants extending for several blocks, Longo said: “All these people here won’t stand for [the hate]. We’re gonna fight this, regardless who’s in power. We’re gonna use love, kindness, and community to fight back.”