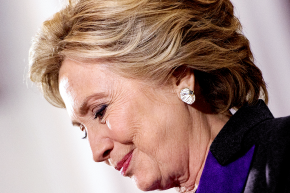 Hillary Clinton's defeat goes against what historically happens, including in both her Senate races

In the effort to explain Hillary Clinton’s defeat in the 2016 presidential election, society-wide sexism against women in positions of power has emerged as one of the obvious suspects. What’s odd is that, historically speaking, female candidates generally outperform their polls on election day, and that includes both of Clinton’s senate campaigns in 2000 and 2006.

Political scientists Christopher Stout at Oregon State University and Reuben Kline at New York’s Stony Brook University have written extensively about the gap between what people tell pollsters and how they actually vote in the privacy of the polling booth. When it comes to minority candidates, the most famous example is the Bradley effect — named for black Los Angeles Mayor Tom Bradley, who lost California’s 1982 gubernatorial election despite leading in the polls. The idea is that people will, in order to not appear racist when talking to a human pollster, say they support a black candidate but then not vote for them. Stout and Kline’s reviews of elections involving female candidates between 1989 and 2008 suggest the opposite is true for women, particularly in more conservative areas.

“People who are in these cultural milieus don’t want to seem like they’re associating themselves with feminism, perhaps, by claiming to vote for a female candidate,” Kline told Vocativ. “So therefore they don’t say they support a female candidate but in the end they do.”

To put it bluntly, people might not want to appear racist, but they are willing to appear sexist just to make it clear they aren’t feminist. “There’s some fear of being judged for voting for a strong female, particularly for an executive office,” Stout told Vocativ.

Both researchers said they were surprised by Tuesday night’s results, with them expecting Clinton to outperform what already appeared to be a safe lead. The question, then, is what happened here that differentiates this election from the majority of previous ones featuring women candidates?

“It’s possible that things have changed since 2008,” said Stout. “There’s been a lot of research, particularly with race, that people are more open about having an overt racial bias. The same might be true with overt gender bias. It’s now more socially acceptable.”

That might well be particularly true in an election cycle where Donald Trump has frequently used racist, sexist, and xenophobic rhetoric, which may have helped to normalize such prejudices in the electorate at large. But Kline suggested last night’s result had plenty to do with Clinton herself. “My own hunch is what played a bigger role in terms of this not being a normal election with a female candidate is exactly who the female candidate was,” he said, arguing that perceptions of Clinton tend to be more fixed and more negative than the typical candidates.

He acknowledged, however, this is at best an incomplete explanation, given her past electoral success. “In her Senate races, still she overperformed the polls,” he said. “The right-wing animus toward her was already well-established when she ran for Senate in 2000.”

Given that there was nearly a 15 percent drop in turnout among Democratic voters compared with 2012, one possibility is that people were actually more likely to lie to pollsters about their intention to vote at all, rather than their plans to vote for a specific candidate. Stout pointed out that polls conducted after elections indicate way higher turnout numbers than actually voted in elections.

“Nobody wants to admit they didn’t vote,” he said. By that reckoning, people claiming they were going to vote but then staying home likely ended up being a bigger issue for the more ambivalent Democratic base. “It’s probably particularly true among Hillary Clinton supporters, who were particularly energized by the Bernie Sanders movement, [who] might say that they’re going to vote and then vote for a third party, or feel ashamed for not voting but ultimately not turn out because they’re so conflicted about the candidates. While I don’t think that was true of Donald Trump supporters.”

As for previous elections, Stout said that President Barack Obama did appear to pay a racial penalty in the 2008 election, though there was no evidence of a similar Bradley effect in his 2012 reelection victory. Part of Obama’s success lay with his ability to mobilize overwhelming minority support, which Clinton couldn’t match Tuesday and wasn’t able to replace with disproportionate support from women — 54 percent of women did vote for her, but that still left 42 percent of women who cast ballots for Trump.

“Part of this is driven by that sense of connection probably between racial and ethnic minority groups, which leads them to be more mobilized when there’s someone like themselves on the ballot,” said Stout. “Women in general don’t have that same level of group consciousness. So we didn’t see that large growth in turnout when there was that opportunity to support the first female candidate, and we didn’t see the same monolithic voting patterns that we saw among African-Americans in support for President Obama.”

Still, Stout argued this may come down to a more simple electoral reality: It’s really hard for a party to win the White House three elections in a row. Indeed, it’s only happened once since Harry Truman left office. Clinton’s defeat may well have less to do with any issues specific to her or her gender and more to do with that basic issue.

“When women run, women win as much as their male counterparts,” said Stout. “So if you substituted Hillary Clinton for a male, would that have led to a different result? I’m not exactly sure.”