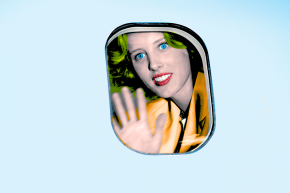 Following the announcement that Donald Trump will be taking office in January and the rush of Americans apparently seeking refuge in Canada, travel companies, universities, and tourism bureaus are seeing a golden opportunity. Which is, of course, hugely ironic, considering how Trump’s win has already put a dent in the global economy so far.

Organizations in New Zealand, Australia, Sri Lanka, and within the U.S. capitalized on Wednesday’s election outcome on social media, claiming to offer “safe” and “calm” refuges to Americans who feel President Trump is simply too much for them to handle.

“Looking to move to a safe, friendly nation? Check out the world-class study options at #MasseyUni,” New Zealand’s Massey University tweeted early Wednesday, as Trump was closing in on 270 electoral votes. While the university did not explicitly refer to the election, the shade didn’t go unnoticed, as one user responded: “One must admire your marketing clout.”

The University of Central Florida was less subtle, advertising its summer 2017 UK study abroad program by asking followers, “Looking to get out of the country?” Cook Islands Tourism went a step further, writing: “If you’re looking for a safe and easy escape, a little paradise is just a hop, skip, jump away” and used the hashtags #ElectionNight and #PresidentialElection to make it absolutely clear it was targeting disappointed voters.

Looking to move to a safe, friendly nation? Check out the world-class study options at #MasseyUni https://t.co/vOraEk0LLE pic.twitter.com/zB7sIMveHY

looking to get out of the country? check out our summer #studyabroad program! information session being held nov. 15th! #checkitout #travel pic.twitter.com/TS3Zm08Wf9