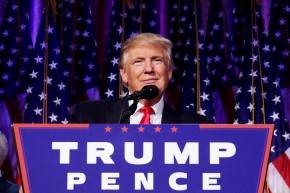 Trump’s Victory Wasn’t Inevitable, Even If It Now Feels Like It Was
By Alasdair Wilkins

Trump’s Victory Wasn’t Inevitable, Even If It Now Feels Like It Was

Why we believe things could only turn out the way we want, and then only the way they actually did

Donald Trump’s victory last night will likely go down as one of the biggest upsets in presidential election history, with Trump outperforming polls that had him three or four points down and election forecasts that gave him as little as a 1 percent chance to win. So why, given all that, can Trump’s victory suddenly feel like it was inevitable? As one cognitive psychologist explains, it’s because we tend to focus on what we want to believe before an election, but on what we have to afterward.

Oberlin College researcher Paul Thibodeau is the author of a 2013 paper on this phenomenon, and its title really does say it all: “The Wished-For Always Wins Until the Winner Was Inevitable All Along.” He and his fellow researchers examined how liberals and conservatives evaluated pundits’ claims before and after the 2012 election. Before the election, each group tended to work hard to falsify claims that indicated their chosen candidate would lose in the run-up to the election. Afterward, however, both sides dismissed arguments that contradicted the actual result. In the case of 2012, Romney voters went from being convinced he would win to certain he never had a chance in the first place, and the same may now be true in 2016 with Hillary Clinton supporters.

The first half of this phenomenon – in which people focus on arguments that confirm their desired result – is an example of what Thibodeau calls motivated reasoning.

“When we are faced with an idea that challenges our view (e.g., a Clinton supporter is presented with information suggesting Clinton might lose the election), we work hard to think critically about that idea,” Thibodeau told Vocativ in an email. “We are motivated to argue against the idea because it goes against what we want or think. On the other hand, when we are presented with an idea or information that is consistent with our worldview, then we don’t think as critically about it.”

In other words, we tend to think of evidence in support of our preferred worldview as obviously correct, while evidence of the undesired outcome is unconvincing or just plain wrong.

“One concrete example: there tended to be a lot more people at Trump rallies than at Clinton rallies,” said Thibodeau. “Some pundits said that the size of these crowds suggested that there was more enthusiasm for Trump among his supporters, which would make them more likely to vote, and, in turn, more likely for Trump to win the election.”

He explained that, before the election, a Clinton supporter would argue the size of rallies don’t predict the outcome of an election, while a Trump supporter would be happy just to take that news at face value. The precise opposite would hold true for arguments in favor of Clinton.

“Clinton was argued to be more ‘fit’ to serve as president,” said Thibodeau. “Pundits argued that voters wouldn’t support someone who said and did the kinds of things that Tump is reported to have said and done.”

This is why it’s probably facile to say that the signs of a Trump victory were there all along, and Clinton supporters ignored them. Sure, that’s probably true, but it’s also incomplete: Trump supporters were also inclined to ignore equally valid indicators of a Clinton victory. It’s just that now both Clinton and Trump supporters are motivated to reject this particular argument because it doesn’t fit with what actually happened Tuesday night.

And, as crushing as it can be for people on the left to think of a Trump presidency as inevitable, Thibodeau argued that line of thinking can be its own kind of coping mechanism.

“If we are unhappy with the results of an election, it can be comforting to think that the outcome was inevitable,” he said. “The alternative is to think that we could have done more to affect the outcome. So, in this case a Clinton supporter is going to feel better if they think that the election outcome was inevitable all along – that it wouldn’t have mattered if they had knocked on more doors or made more phone calls to try and rally support for her to win.”

Thibodeau suggested that people can feel disillusioned by election results that seem to be inevitable, but that need not be the case. Indeed, rightwing reactions to the previous two elections – the Tea Party after 2008 and the rise of Trump in response to 2012 – suggest some groups have successfully refused to accept the inevitability of their defeat. People can move forward and find new ways to make their voices heard, but only if they resist the urge to believe their voice never mattered in the first place.