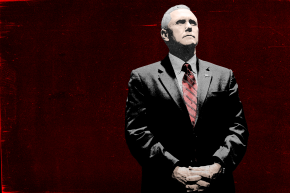 Let’s Not Forget How Awful Pence Is For Women

Trump is bad on reproductive rights, but his vice president is even worse

As the reality of Donald Trump’s win sets in, many are darkly considering the ramifications of his presidency for women, people of color, immigrants, and the LGBT community. But, in the interest of a more fully considered despair, let’s not forget Vice President-elect Mike Pence — especially when it comes to reproductive rights.

“In many ways, Pence’s record is the embodiment of the most extreme wing of the antichoice movement,” Andrea Miller, president of the National Institute for Reproductive Health Action Fund, told Vocativ.

That record includes earlier this year — in the year 2016! — signing a state law that banned abortion in cases of “genetic abnormality,” forced women considering an abortion procedure to undergo an ultrasound to hear the fetal heartbeat, instituted an 18-hour waiting period before termination, and required women to pay for the cremation or burial of aborted fetuses. (It was blocked by a federal judge.)

Trump, on the other hand, has no record on reproductive rights, because he doesn’t have any experience as a politician. But he has said he will appoint Supreme Court justices who will overturn Roe v. Wade and that women should be “punished” for abortion.

“Together, Trump and Pence represent the worst ideas and most extreme views on abortion – women of color and low income women have a lot to be worried about,” said Destiny Lopez, Co-Director, All* Above All, a reproductive rights organization.

More Donald Trump Wants To Punish Women For Having Abortions

Despite this, reproductive rights activists are maintaining a tone of optimism about the fight that is to come. “We have also seen tremendous signs of hope and we have seen opportunities for progress,” said Miller. That includes the historic Supreme Court decision this summer that struck down abortion restrictions in Texas, which Miller calls a “historic reaffirmation of decades-old precedent and a reminder that the court does provide a critical check.”

Now, she says, activists need to focus on state and municipal elections in the coming years. “You go local,” she said. “It’s really about looking at those places where we can begin to build that state-level and local-level firewall.”

Miller, who has been working in reproductive rights activism for decades now, has seen threats to abortion access rise and fall. She says, “We have come through exceedingly challenging times before and each time the pendulum swings us further in the right direction.”