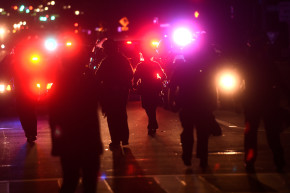 Students Across The Country Protest Trump’s Victory
By Jacob Steinblatt

As soon as it became apparent that Donald Trump would be the next president of the United States, students and other opposed to his presidency took to the streets around the country to protest the results of the historic election.

Footage and images of late night protests were posted on social media, showing angry demonstrations on campuses in California and outside the White House in Washington D.C. Students chanted “Not my president,” and shouted insults at Donald Trump. More protests are planned for Wednesday at campuses around the country.

Students lit flares in Berkeley, California, filled the streets in Santa Cruz, California and demonstrated at the University of Oregon.

Flares are being lit, chants of "Not my president!" Continues to move down telegraph #berkvote pic.twitter.com/C1AhiqQrFE

well the riots have already begun on my campus they're all chanting "fuck Donald Trump" pic.twitter.com/QyaXmTUX9X

This is the scene on 13th Ave right now. A crowd of what was hundreds still marching in protest. Most U of O students. pic.twitter.com/LgekwfMxz7

At the same time, people gathered in front of the White House.

Students of all ages, races, backgrounds out in front of the White House to protest Trump presidency. #Elections2016 pic.twitter.com/gMaWjliD2A

Protestors in Oregon reportedly burned Donald Trump campaign paraphernalia at one demonstration. There are more events planned for Wednesday in New York City, Nashville, Chicago, Louisville. There’s even one protest scheduled to occur in London, at the U.S. embassy building.

It's a dumpster fire on Broadway from 20th to 14th in #Oakland. Anti-Trump protest pic.twitter.com/ngwSUQs1hp