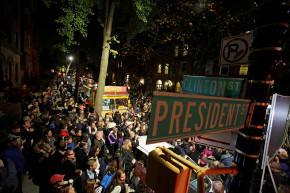 An Election Night Party At The Corner Of President And Clinton

Hundreds of people gathered at the intersection of Clinton and President streets in Brooklyn, New York, on Tuesday evening to view the results of the 2016 presidential election. Although the scene was dominated by jubilant supporters of Democratic nominee Hillary Clinton, feelings of uncertainty and nervousness commingled with the excitement in the air.

Amanda Zinoman, a documentary film editor, was one of the main planners of the Carroll Gardens “Election Night Celebration,” along with Hayley Geftman-Gold. Almost 3,500 people were invited through a Facebook event. Zinoman told Vocativ Tuesday that she initially wanted to hold the event at the intersection of President and Union streets to promote a spirit of togetherness, but had to move the festivities because there is a polling place there. But still, “Hillary is of course the inspiration,” she said in a phone interview.

Zinoman, an ardent Clinton supporter who has been involved in politics since she was a teenager in the late ’70s, said she received a permit from the NYPD only two days ago, adding that she helped set it up to provide some catharsis to a neighborhood wearied by the long campaign season. “I think this election has been so disgusting and upsetting and people are so stressed out, that this is kind of an answer so we can get a little relief,” she said, adding that she was unsure of how many people would show up to the block party.

The event kicked off at 7 p.m., with a big screen set up on the corner to broadcast the results. Food trucks lined the street to cater to attendees. As the results poured in on CNN, a loud mixture of cheers and boos greeted the news, especially as the night progressed and a once-cheery prognosis for Clinton started to fade. Police on the scene estimated that about 1,000 people were present at the height of the event around 8 p.m.

Darren Gordon, 47, walked only a few blocks to the event with his two young children to support Clinton. The huge turnout came as no surprise to him and his family. “The thing about this neighborhood is that it’s very communal and it’s very family oriented,” Gordon, a lifelong Democrat and a general contractor, said. “Whatever the adults are in, the kids are in it, too.”

Kim Howze, 35, said she was invited to the party by her friends, and was drawn to the idea going to an outdoor election party on a crisp fall evening. “You know, it’s New York, a blue state, there’s kind of a team camaraderie and I like it. It’s interesting to just stand around and watch the numbers come in and kind of feel the vibe and energy of the crowd,” she told Vocativ. A Clinton supporter and Maryland native, Howze said she was attracted to the Democratic nominee due to her experience and the fact that she is a strong female leader.

“I think of all the people that have run for president, she’s probably the most qualified,” she said. As for Clinton’s rival Donald Trump, Howze said she thinks his transition into politics was poorly executed, adding that he should have taken a page out of former New York Mayor Mike Bloomberg’s businessman-turned-politician playbook. “I’m not saying that he could not have done a good job, but I don’t think he really understood [politics],” she said.

Interspersed within the crowd were a handful of Trump supporters, countering the Clinton camp’s cheers with their own jeers. Born and raised in Carroll Gardens, 45-year-old Annemarie Ilardi expressed anger that so many outsiders showed up to the event and clogged a thoroughfare in her neighborhood. “I really don’t care for her, and I think this is diabolical that they actually shut the street down because it’s President and Clinton street, and 99.9 percent of people don’t even live here,” she said. “So I came out, but I actually came out to show my support for Trump.”

As the time drew closer to 10 p.m. and a Clinton victory seemed more and more uncertain, an air of apprehension appeared to wash over many members of the crowd. Sujal Vaidya, 40, said that he was suddenly feeling doubtful about the race. “I don’t think it’s going to be close in the end, but I’m nervous right now,” he said at around 9:50 p.m. The attorney and Clinton supporter admitted that he’s not very into politics in his everyday life, but maintained that the next president’s credibility was very important to him. “I find America’s place in the world to be an important thing, and so the credibility of our leader is something that I put value in. And I think Donald Trump lacks any credibility whatsoever as a politician,” he said. “He’s a reality TV show guy.”

At 10 p.m., the crowd was told that the event was officially over. People began debating whether to turn in for the night or to find a local watering hole, seemingly recognizing that a long and stressful night lay ahead.