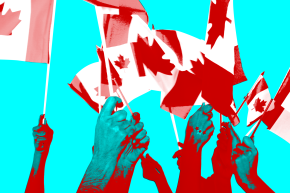 As it became clear Tuesday night that the unthinkable — a Donald Trump presidency — was actually happening, people began scrambling to come up with a backup plan. Interest in moving to Canada, a longtime punchline, surged.

The Canadian government’s immigration website, where prospective emigrants would go to apply for visas, was periodically down on Tuesday night. According to a spokesperson for the Canadian government, the site “became temporarily inaccessible to users as a result of a significant increase in the volume of traffic.” In order to fix the issue, “Shared Services Canada worked through the night…to ensure that the website is available for users as soon as possible.” (It’s now back up after nearly 11 hours.) A Vocativ analysis of social media chatter at 9 p.m. showed a peak of 25,000 mentions of Canada an hour — a level we haven’t seen since the second presidential debate.

While Google Trends data is — as we have noted — not always quite as telling as news media outlets make it out to be, steady increases in web traffic for the search “how to move to Canada” could be observed on Tuesday night.

Americans also flocked to Twitter to express their interest in emigrating, calling out for Drake and his more tolerant homeland.

@Drake what time you picking me up? I'm ready to go to Canada, packing right now. pic.twitter.com/Ty9cO6cgKs

Hey @Canada mind if I crash at your place for the next four years??

Hey @Canada mind if I crash at your place for the next four years??

@Canada Please god let me in

A (somewhat facetious) live feed of the Canadian border has been set up in anticipation of a mass exodus.

The nation of Canada, for what its worth, seems pretty open to the idea.

To our U.S.-based followers, this could be the most important web page you read this year: https://t.co/LKl8FqcRvI #trump #ElectionNight pic.twitter.com/DZFjbtAeie

This story was originally published on Tuesday night at 10:50 p.m. EST. It has been updated to reflect the latest response from Immigration, Refugees and Citizenship Canada.