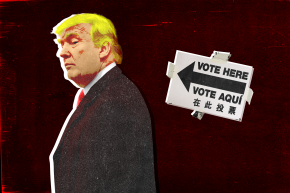 As Trump Worries ‘About Hacking’ Of Election Day, Experts Say No Proof
By Kevin Collier

As Trump Worries ‘About Hacking’ Of Election Day, Experts Say No Proof

Trump has warned of hacking and rigged machines, but he won't say where or how

Despite Donald Trump proclaiming on Election Day that machines were changing votes for his party to that of his opponent Hillary Clinton’s, experts and poll watchers say they’ve seen no evidence at all of such phenomena.

Speaking Tuesday via a phone interview with Fox News’s Martha MacCallum, Trump cited vague “reports” that a number of voters had tried to vote Republican but that the electronic voting machines they tried to use instead picked Democratic choices.

It’s unclear what reports Trump believed he had seen. He didn’t specify, and his campaign didn’t respond to request for clarification.

The nonpartisan nonprofit Common Cause, which sends employees to monitor election integrity across the country, said it was aware of only a single complaint where a voter had tried to pick one candidate for president on an electronic voting machine, but saw the opposite result highlighted instead.

That’s not to say the phenomenon Trump described is necessarily not rooted in reality. Voting experts have consistently insisted both that the U.S. election system is fairly impervious to outside attackers and mass rigging systems, but that many of the country’s voting machines are growing dangerously out of date.

“There have been calibration issues with some of the touchscreen machines. As machines age, they get less accurate,” Common Cause said in a statement to Vocativ. “It’s not widespread, it’s not stealing, it’s not hacking.” A Common Cause representative added that they were aware of a caller who had complained that she had tried to vote for a Democratic ticket but saw the Republican ticket highlighted instead.

As early voting began in the days leading up to the election, several voters reported similar issues. In each of those cases reviewed by Vocativ, an election official from that county or district had investigated those claims and found it was user error. In such cases when a voter highlights the wrong candidate, they can switch it before confirming their vote.

“It is true that because most of the touchscreens in the U.S. are older, people can very, very occasionally have the experience of their vote ‘flipping,’” Lawrence Norden, Deputy Director of the Democracy Program at NYU’s Brennan Center for Justice, which closely monitors the U.S. voting process, told Vocativ.

But not only are such cases not evidence of “hacking” — voting machines are not hooked up to the internet — but if someone were trying to intentionally rig an election, it’s very unlikely they would be so obvious, Norden added.

“No one is stealing anyone’s vote — under the highly unlikely scenario where a machine was hacked, it would make no sense for a hacker to give the voter notice that her vote was being stolen,” Norden said.