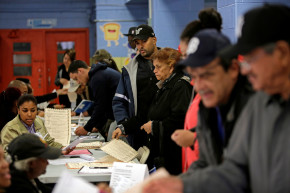 Even if you got up early to vote on Tuesday morning, there's a good chance you'll be waiting in line

Soon after polls opened, many voters reported long waits in line — REUTERS
By Brian Patrick Byrne and Amit Weiss
Nov 08, 2016 at 10:04 AM ET

Performing one’s civic duty by voting in the presidential election comes with a necessary evil: waiting in line. If you were one of the 42 million people who voted early, you managed to avoid the lines sprawling out of polling offices and around city blocks across America on Tuesday.

If not, chances are you’ll be facing a line — even if you did wake up early to beat the crowds. Vocativ searched Twitter for mentions of the word “line” and words such as “poll” and “election” and discovered around 40,000 tweets between 5 a.m. and 9:30 a.m. EST Tuesday. Most states opened polls between 6:00 a.m. and 7:00 a.m. local time, and remain open for around 12 hours before counting begins.

Social media users all over the country posted pictures and videos showcasing the seemingly large numbers of people who have come out to vote. If early voting numbers are anything to go by, turnout could be slightly down on 2012, when 46 million people cast their ballots ahead of election day. However, early reports suggested turnout in battleground states was high.

A look at the line I just had to wait in to vote. Stay in line. #iVoted pic.twitter.com/Ms2CVfrnJj

BREAKING: Record turnout seen in all battleground states. B/c my dentist's cousin, who lives in Cleveland, says the line to vote was long

Arrived to my polling place in Philly at 7:05 and there's already a line. Not Obama 08 long, but the second longest I've seen.

I have been in line for 20 min in Utah to vote. The line of 25 is not moving. How freaking ridiculous! pic.twitter.com/m9jn7j5oTw

My polling site was packed. Long lines before dawn. Guessing about 90% black voters, most over 40, most women. Line still long now.

It's 650am & the line to vote is 2 blocks long. Latino's in the house!!! pic.twitter.com/wTlcFuFMaP

One heck of a line to vote in Altavista at the Fire Dept.

Standing in line in my Republican town, waiting to vote for @HillaryClinton, listening to my #Election2016 playlist, has got me like…. pic.twitter.com/88bmUfSQrC