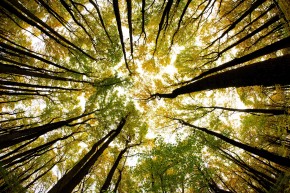 The amount of CO2 in the atmosphere has stopped accelerating, but for how long?

Humans are pumping more carbon dioxide into the atmosphere than ever before, and those rising levels of CO2 are fueling global warming. Plants are doing all they can to keep CO2 from increasing any faster than it already is, according to a new study, but they can’t keep it up forever. In fact, plants could soon switch from absorbing carbon to releasing it into the atmosphere, with dire consequences for the planet.

Just to make this totally clear: The amount of CO2 in the atmosphere is absolutely still increasing, which means global warming is absolutely still happening. We’re talking about the rate at which the amount is going up, and the data since around the beginning of the 21st century indicates the increase in atmospheric CO2 has stopped accelerating. Trevor Keenan, a climate scientist at Lawrence Berkeley National Laboratory, used global climate data and computer models to figure out where that excess carbon is going if not into the atmosphere, and the answer is clear: Plants and trees are soaking up more carbon than ever before.

“If ecosystems weren’t taking up as much carbon dioxide as they are, we would have atmospheric concentrations currently that we don’t expect for another 30 or 40 years,” Keenan told Vocativ. “Carbon dioxide in the atmosphere continues to go up and that is causing climate change. That it’s not going up as fast as it would be without plant-based ecosystems, that’s just a very lucky thing.”

Plants naturally absorb carbon dioxide as part of photosynthesis, which fuels their growth. That in turn means there are more plants around to take in more carbon, which boosts the overall effect. Plant respiration, in which they take in oxygen and release carbon dioxide, also appears to have slowed down in recent years. The researchers found that plant respiration in particular is sensitive to temperature, and a relatively slower increase in temperature would reduce how much carbon dioxide plants release. Not that this situation is likely to last much longer.

“We expect an acceleration in the rate of global warming over the coming years, which may already have started with the large El Nino event over the last two years,” said Keenan. “It’s likely that this pause is just a momentary pause before we return to the usual situation of large increases in the growth rate of atmospheric CO2.”

More Climate Change Could Melt All The Arctic Ice By 2045

Keenan’s research suggests vegetation across the planet has played a role in forming what’s known as a carbon sink. In the tropics, rainforests are already well-known for their essential role in maintaining the environment, but more arid regions likely play a role as well, with plants native to those areas well-suited for taking in lots of carbon while using as little water as possible.

Elsewhere, climate change and its root causes may play a role in the surge in vegetation. The higher latitudes are greener now than ever before, which may well be because temperatures there are now warm enough for more plants to grow. In temperate regions, areas historically used for farming are now experiencing reforestation as more people leave for cities. And, as warm seasons stretch further into autumn, deciduous trees keep their leaves that much longer, giving them more time to absorb carbon.

The temptation might be to say that the very conditions fueling climate change might also be putting plants in the optimal position to absorb the excess carbon. But plants can’t take in nearly enough CO2 to offset all that we emit. After all, none of this has actually stopped atmospheric CO2 from increasing. The math just doesn’t work. And eventually this carbon sink could actually flip, becoming a major source of new carbon in the atmosphere.

“That’s a real danger that ultimately they could stop taking up carbon dioxide as temperatures get warmer as climate change continues to get more extreme,” said Keenan. “They could become a net source and greatly accelerate climate change. That would be a situation where no matter what we do, we’re adding emissions.”

The problem is that plants can’t keep absorbing carbon as part of photosynthesis indefinitely. At some point, they have to stop taking in carbon and start releasing the excess through respiration. At that point, plants would no longer be cutting into human CO2 emissions, but amplifying them. In the meantime, Keenan said many countries are looking to rely on plants as a carbon sink in their efforts to reduce their net carbon emissions. It’s just uncertain for how long that will prove an effective environmental policy.

“Different models will give you a different prediction,” he said. “Some of them will predict the land sink will become a source by the end of this century, and some of them predict it will become an even larger sink. And that’s one of the big problems we’re facing because without that predictive power we really can’t answer those important questions of will this continue, how much can we rely on it, or will it reverse and accelerate global warming even further.”

While there are limits to this natural process, Keenan said it’s at least worth considering whether we can enhance plants’ talent for absorbing carbon. He pointed to plants that have already been specifically bred to have their less edible parts above ground, which is meant to protect them from being eaten.

“You can switch that and breed plants to allocate more carbon below ground instead, and by doing so rebuild soils that have been degraded worldwide and increase the carbon sink,” he said. “There are definitely options to look at in this space, and hopefully it’s something that will be gaining more momentum as people realize there is this huge natural resource out there that is helping us. And perhaps we can leverage it to help us even more.”

Plants aren’t going to stop climate change, and it’s an open question how much longer they can even hold back the increase in atmospheric CO2. But we can still be thankful for even this small mercy, and Keenan said our goal now should be to make the absolute most of this bit of help we’re getting against the climate change onslaught.