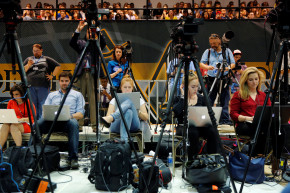 This was the social media election, but what stories did the masses mention the most?

Millions of Americans have interacted with social media throughout the campaign — REUTERS
By Brian Patrick Byrne, Mor Turgeman and Adi Cohen
Nov 08, 2016 at 3:32 PM ET

In March of 2015, Senator Ted Cruz was the first major party candidate to announce his candidacy for president. Little did we know we’d spend the next 20 months watching a group of adults acting like children on cable news and endlessly refreshing polling sites. Now that it’s all nearly over, in a fit of nostalgia (mixed with a tiny bit of masochism), we decided to look back. And, what medium could be more appropriate for this race than Twitter?

Vocativ pulled the five biggest election-based hashtags, based on the first 24 hours after they started gaining traction. That left out ongoing hashtags (like #ImWithHer and #MakeAmericaGreat again) and led us towards tags related to specific incidents, rather than long-burning themes.

If you’re already nostalgic for the 2016 race, here are some of its biggest hits.

This hashtag had a humble (if racist) start, created by a conservative Twitter user who posted “#AltRightMeans not being ashamed of being white,” on August 24.

But it rocketed into the mainstream the next day, on August 25, when Hillary Clinton gave a speech in Reno, Nevada, in which she slammed Trump for hiring former Breitbart executive Stephen Bannon as CEO of his campaign. Clinton said, “The de facto merger between Breitbart and the Trump Campaign represents a landmark achievement for the alt-right. A fringe element has effectively taken over the Republican Party.”

Months after Hillary Clinton’s campaign chairman John Podesta fell victim to a phony Google email scam, giving hackers access to his personal account, Wikileaks began publishing thousands of what were allegedly Podesta’s emails. The U.S. government linked the attack to individuals connected to the Russian government, who allegedly then handed the emails over to Wikileaks. To date, the whistleblower organization has published 34 batches of emails.

One of the earliest batches, published on October 7, got the most mentions. They included Clinton’s Wall Street speeches, which her campaign has declined to release voluntarily. In one, Clinton discussed needing to have “both a public and a private position” on controversial issues — a quote she said was taken out of context but which nonetheless came up at a presidential debate. Each release revived the #PodestaEmails hashtag, providing it with continued popularity.

Hours after Hillary Clinton was filmed stumbling at a 9/11 memorial event at One World Trade Center in New York on September 11, her doctor revealed she was suffering from pneumonia. Cue thousands of Trump supporters insisting Clinton was no longer fit to be president, with the incident gaining more than half a million mentions in the 24 hours after a video of her stumble was posted online.

The most popular hashtag was #HillarysHealth, followed by #HillaryCollapse, and #SickHillary, and curiously, #HillarysShoe. That hashtag related to tweets claiming Clinton left her shoe on the curb as she was helped into a parked black minivan. However, others pointed out that the shoe did not match the ones Clinton was seen wearing that morning.

On October 8, The Washington Post published a 2005 video clip in which Donald Trump can he heard boasting about how he sexually assaulted women. “When you’re a star, they let you do it,” Trump told former Access Hollywood host Billy Bush, who can be heard laughing.

I've been #grabbedbythepussy more times than I count. Never mentioned it until #trumptapes cuz it seemed normal. #everydaysexism

The hashtag #TrumpTapes surged in the 24 hours directly after the Post’s story, becoming one of the dominant stories of the tail end of the entire campaign.

Hillary Clinton was speaking at a fundraising gala on September 9 when she said: “You could put half of Trump’s supporters into what I call the basket of deplorables. Right? The racist, sexist, homophobic, xenophobic, Islamophobic — you name it.”

Trump’s followers created the #BasketofDeplorables hashtag, and took ownership of the “deplorables” descriptor, proudly adding it before their names on their social media profiles as a means of protest.

Clinton apologized the next day — sort of. She said she was wrong, not for using the word “deplorables,” but for saying they made up “half” of Trump’s support base, suggesting she still believed at least some of them were, in fact, deplorable.

And that’s that. If it’s any consolation, the 2020 race will begin up in just a few short years.