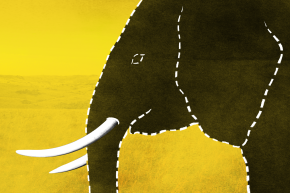 Every year, authorities seize upwards of 40 tons of elephant ivory illegally traded on the black market. Those captured shipments are the tragic end result of widespread poaching in Africa. And a new study has confirmed a grim truth: The overwhelming percentage of ivory on the black market isn’t from some old stockpile, but from elephants killed just in the last few years.

Because elephant poaching represents a continent-wide problem, it can be difficult to say with certainty how many elephants are killed in a given year and, on the other end of the poaching epidemic, precisely where and when captured ivory came from. One idea that had gained some currency in recent years is that new poaching really is on the decline in Africa, with most of the ivory on the black market instead being taken from existing government stockpiles. According to Kevin Uno, a researcher at Columbia University’s Lamont-Doherty Earth Observatory and co-author of this new study, that isn’t the case.

“The ivory in the trade network is over 90 percent coming from elephants killed in the last three years,” Uno told Vocativ. “That has pretty big implications for poaching right now and the survival of elephants for generations to come.”

Uno and his fellow researchers determined that by examining 231 tusks from several large seizures made between 2002 and 2014. They used radiocarbon dating to determine approximately when poachers killed each elephant and stole its tusks, allowing them to estimate the lag time between when poachers kill an elephant and when its tusk appears on the black market.

Many of the tusks came from elephants killed within only a few months of their capture, with only a handful dating to more than three years before the seizure. Of those 231 tusks, just one was decades old, strongly suggesting that government stockpiles weren’t a major source of ivory in these seizures.

“It really highlights the need to stay vigilant in terms of the conservation efforts, the enforcement efforts, the anti-poaching efforts, and the policy efforts,” said Uno.

At first glance, elephants don’t appear to be as vulnerable as other endangered species, at least not when you consider what researchers have estimated as their overall population.

“The number they came to is 352,000 elephants, which is, for a lot of endangered species, a number to be envious of,” said Uno. “But 100,000 elephants were killed in basically three years. So then we have to really start revisiting that 352,000 number if 100,000 are being killed every three years. At that rate, we could be without elephants in a decade or two.”

Uno cautioned against drawing too many deeper conclusions from the dataset, but a couple intriguing trends did emerge. While the tusks were indeed overwhelmingly from recently killed elephants, recent can be relative. While tusks seized around 2009 and 2010 averaged only about a half-year’s lag time, more recent tusks could take nearly three years on average before showing up on the black market. Uno said there are a couple potential possibilities to explain that phenomenon.

“One is that it’s taking longer to fill the shipping container or collect the critical mass of tusks before you send the shipment out,” said Uno.

That would suggest elephant populations are even more critical now than they were a few years ago. There’s some evidence to support that suggestion, as other studies have indicated that tusks are, on average, getting smaller. That means poachers are killing younger elephants for their tusks, which means the population numbers are smaller overall and it’s that much more difficult for elephants to restore their population.

“We all know that the really big jumbos were hunted out long ago, and then progressively in the last eight years when the poaching rates really started to spike, we’ve seen a decrease [in tusk size],” said Uno.

The other possibility – and these don’t have to be mutually exclusive – is that this is an issue of geography. The earlier seizures were often from western Africa and the TRIDOM region, which encompasses three national parks in the Congo basin. Both areas are heavily forested, compared with the largely savanna regions of eastern Africa where the more recent seizures typically came from.

According to Uno, it’s possible poachers are more quickly able to fill a shipping container with elephants from the easier hunting grounds of eastern Africa than with the forest dwellers in the western regions.

That doesn’t mean the forest elephants are doing better, though. Indeed, the paper points to specific populations in both the forests and the savannas that have dropped by at least 60 percent in the past decade.

“Elephants are still very much in trouble, and we need to protect them from many different angles,” said Uno. “Boots on the ground, anti-poaching teams. We need governments in Asia and Africa to step up. It’s got to be kind of a multi-faceted approach.

Vocativ previously spent time with poachers in the African bush for a 2013 video investigation.