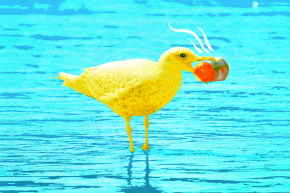 Seabirds Eat Plastic Because It Smells Like Food
By Alexandra Ossola

Scientists can’t find 99 percent of the plastic that should be in the world’s oceans. They suspect some of it might be found in the bellies of animals, especially birds — nearly every seabird on earth will have eaten plastic from the ocean by 2050. But plastic doesn’t look like a seabird’s typical food, so why are they chowing down?

Because plastic can make birds sick or even kill them, researchers weren’t sure why the birds were eating the brightly colored plastic, which looks nothing like the krill or fish they typically eat. Now an experiment conducted by researchers from the University of California, Davis and published Wednesday in Science Advances, shows that it’s the smell of the plastic that makes the birds confuse it for food.

Seabirds like albatrosses, petrels, and shearwaters find their prey by smell. As they skim over broad swaths of ocean surface, their sensitive sniffers seek out a chemical called dimethyl sulfide, which krill emit when they prey on plankton. Researchers suspected that floating plastic might be giving off the same chemical signals because small marine organisms like algae or plankton congregate around plastic surfaces. The plastic itself, they feared, might even be releasing a sulfide compound, which could make the scent stronger for seabirds to detect.

To evaluate this theory, the researchers tested three types of plastic beads, each made of slightly different types of plastic that together make up about 60 percent of the plastic found in the world’s oceans. They dropped these beads into the Pacific, off the coast of California, encased in mesh bags and attached to buoys, so that researchers could retrieve them and avoid adding to the millions of metric tons of plastic already known to be in the ocean. After the beads spent three weeks in the ocean, the researchers went back and collected them to see how their chemistry had changed.

They found that all the plastic beads that had been in the ocean were emitting dimethyl sulfide. The same plastic left in the lab, however, did not, implying that the chemical changes that make it attractive to birds happen in the ocean, especially in the light-filled zone close to the surface. The researchers then drew from previous studies to show that species of birds that are more sensitive to the scent of dimethyl sulfide are more likely to consume plastic.

The researchers’ findings upend the prevailing theory as to why sea birds eat plastic — because they think it looks like food. This suggests that the chemicals given off by plastics might be tricking other animals, such as turtles, penguins, fish, and even mammals like dolphins, into eating them. And so far, there are no clear plans as to how to stop animals from eating plastic, other than cleaning up the plastic itself. Scientists will need to conduct more studies to better understand what draws animals to plastic in order to devise new ways to stop them from eating it, if we’re to save water species from this harmful fate.