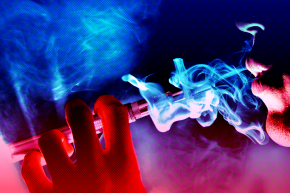 How Do We Know If E-Cigarettes Are Harmful?
By Alexandra Ossola

How Do We Know If E-Cigarettes Are Harmful?

A new study used a common test to determine that they aren't, but scientists need more evidence

Proponents of e-cigarettes tout them as safer, less addictive versions of conventional cigarettes. Scientists, however, are still evaluating those claims. A recent study, conducted by researchers from tobacco company British American Tobacco, used a unique lab-based test to assess whether e-cigarettes are likely to cause genetic mutations that could lead to health problems such as cancer. But other scientists aren’t convinced this particular test can tell them everything they need to know about the potential dangers of e-cigarettes.

Scientists have known for decades that smoking cigarettes causes a slew of health problems, from lung diseases like emphysema and chronic bronchitis to diabetes and arthritis. It can also lead to mutations in DNA that can cause cancer.

The test that the researchers used is designed to assess whether or not a substance is carcinogenic. It’s called the Ames test. In it, researchers place five different strains of salmonella bacteria in petri dishes. They then expose the bacteria to chemicals found in smoke by placing paper from a cigarette filter into the petri dish. After a few hours, the researchers check how much the bacteria mutated compared to those that weren’t exposed to the filter paper by sequencing the bacteria’s DNA. The Ames test provided early evidence that a number of chemicals, such as ethylene dibromide (once used in leaded gasoline) and safrole (once a flavoring agent for root beer), were carcinogenic.

In the most recent study, published earlier this month in the journal Mutation Research/Genetic Toxicology and Environmental Mutagenesis, the researchers performed a modified version of this test for e-cigarettes. They collected e-cigarette vapor onto a filter paper that they placed in some petri dishes, and also exposed the petri dishes of bacteria directly to e-cigarette vapor, pumping it from a Vape ePen onto the surfaces of the petri dishes for three hours. They compared the mutations from these bacteria to those exposed to a cigarette filter paper and cigarette smoke, and to control bacteria simply left untouched for the same amount of time. And while the bacteria exposed to the cigarette paper and smoke developed more mutations the longer they were exposed, those exposed to chemicals from e-cigarette vapor were unaffected.

At face value, these results suggest that e-cigarette vapor is not as carcinogenic as cigarette smoke. “’This study adds data to support the growing evidence base that e-cigarettes have the potential to be significantly less harmful compared to cigarette smoke, though more research is needed,” James Murphy, the Head of Reduced Risk Substantiation at British American Tobacco, said in a press release.

Though the Ames test has been used widely since the 1970s, it’s far from a perfect tool to evaluate the safety of a chemical. Multiple studies have shown that Ames tests, as the authors of one study put it, “are screening tests, not sensitive measures of dose-response.” Bacteria are not humans and cannot mimic the complex interactions between our extensive genomes, immune systems, and other tissues. “There is lots of direct evidence that e-cigs cause adverse vascular and lung effects (which an Ames test would not detect),” Stanton Glantz, the director of the Center for Tobacco Control Research and Education at the University of California San Francisco told Vocativ via email. One study found that only a small number of compounds found to cause mutations in the Ames test turned out to be carcinogenic in humans.

As the number of people smoking cigarettes has dropped, several tobacco companies have gotten into the e-cig business to retain their customer base. British American Tobacco is no exception; earlier this year, regulators in the United Kingdom approved its vaping device as a quit-smoking aid, and the company will soon launch its tobacco-based e-cigarette in Japan.

It makes sense for British American Tobacco to use the Ames test to find favorable results for the safety of e-cigarettes. And though several in-depth studies have determined that e-cigarettes are probably safer, many researchers still have questions before they can sanction e-cigarettes as safe. The National Institute on Drug Abuse page on e-cigarettes states: “While e-cigarettes are often promoted as safer alternatives to traditional cigarettes, which deliver nicotine by burning tobacco, little is actually known yet about the health risks of using these devices.”

No one is quite sure what chemicals are in e-cigarette cartridges, nor the effect of those chemicals when they are vaporized. Without more rigorous scientific analyses, researchers and public health officials alike won’t be able to say confidently whether or not e-cigarettes are safe.