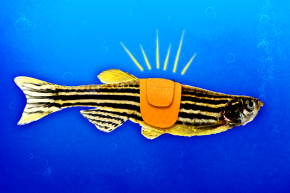 Zebrafish Hold The Secret To Healing A Broken Spine

Tiny zebrafish may not look like much, but they’re one of the toughest fish you’re likely to find in any aquarium. They can completely regenerate their spinal cord after it’s severed, reversing an injury that would leave most humans either paralyzed or dead. Now researchers have found a gene crucial to the zebrafish’s healing factor.

It takes about eight weeks for a zebrafish to regenerate its spinal cord after it’s severed – which, given zebrafish only live a few years, is roughly the equivalent of a human taking 3.5 years to recover, which still doesn’t sound too bad. Cells begin growing toward each other over the gap in the spine, spanning distances more than 10 times their individual lengths. New nerve cells and tissues then form, and the zebrafish is as good as new.

“After you completely sever the spinal cord, the tissue forms a bridge across the two injured pieces of the cord,” Kenneth Poss, a regenerative medicine researcher at Duke University, told Vocativ.

Poss and fellow Duke researcher Mayssa Mokalled identified a particular gene, known as connective tissue growth factor, as essential to this recovery process. Their recent research found that the levels of this gene increased in the cells that formed the bridge across the gap in the spine. When they deleted that gene from the zebrafish, they could no longer regenerate their spinal cords, further indicating the importance of this gene to the fish’s rapid healing.

“By contrast, in the case of a mammal, when there’s a severe spinal cord injury, there’s a massive scar that forms from the connective tissue and the support tissue for the spinal cord,” said Poss.

While zebrafish are particularly noted for their regenerative ability, they may not actually be all that unusual. There are about 40,000 similar fish species, only a handful of which have actually been tested for their ability to heal. It’s possible most fish and other simpler vertebrates like amphibians might well possess this ability, even if we have not observed it yet in all them.

“In fact, mammals may be the minority,” said Poss. That’s the one thing we can be confident of: However common regeneration might be in the rest of the animal kingdom, mammals have been shut out of the party. “Certainly there’s been no mammalian species shown at the adult stage to regenerate spinal cord tissue that can restore function and reverse paralysis like in these other species.”

The gene is also present in mammals, but our more complex biology means it isn’t enough to heal such a devastating injury. But that scar tissue precludes any such recovery in mammals, even though the human version of that gene actually let zebrafish regenerate their spines when it was inserted in the fish. Mammal biology is too complex for the gene to do the same good it can in a fish.

“That scar is a big problem for spinal regeneration,” Mokalled told Vocativ.

As such, this gene alone probably doesn’t hold the secret to reversing spinal cord injuries in humans, but it could be part of a more complex solution. Now that Mokalled and Poss have identified this crucial gene, they want to examine more closely its function in mice. Understanding its function in a relatively simple mammal like the mouse might point the way to incorporating it into future therapies for humans, though that’s a long ways off.

“Regenerating spinal cord injuries is going to require a combination of cellular approaches, molecular approaches, as well as bioengineering approaches,” said Mokalled. “I don’t think it’s going to be one solution that will fix this complex problem.”

What this particular gene might provide is a way to boost the body’s internal healing ability, which could then work with more powerful therapies meant to keep scar tissue in check and promote regeneration of the spine.

He added that regenerative medicine is still in its relative infancy, meaning there’s a lot of work to do and, hopefully, a lot of secrets to be uncovered about how to repair the human body’s most devastating injuries. Understanding how other members of the animal kingdom, like the zebrafish, heal from seemingly impossible injuries could go a long way toward that goal.

“It’s challenging work and we need a lot more information, so people should know that there’s a lot of discoveries to be made,” he said. “The field needs time and support to make these kinds of findings.”