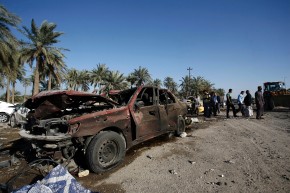 ISIS has dispatched hundreds of suicide bombers in the past year, with the majority around the city of Mosul

Suicide bomb attacks carried out by Islamic State fighters spiked this past October, in numbers released by the terror group’s affiliated online network, the Amaq agency. At least 120 attacks occurred in Syria and Iraq, with the vast majority, over 65 percent, around the city of Mosul which is currently under siege by Iraqi and Kurdish security forces.

Vocativ looked at Amaq’s monthly reports on the attacks dating back to September 2015. The numbers, which cannot be independently verified, show that in that time ISIS has dispatched over 1,000 suicide bombers across Syria, Iraq, Egypt and Libya.

The most have occurred in Iraq, with the western Anbar province at 242 attacks, and Mosul’s Nineveh province close behind at 163. The various methods listed say that the majority of attacks are carried out by a single person dispatched with an explosives-rigged vest, followed by those driving bomb-laden vehicles.

The battle for Mosul, which began last month, has already been marked by numerous suicide bombing attacks. ISIS said that in the first week of the campaign it sent 58 separate suicide bombers towards the forces attacking the city’s outskirts.