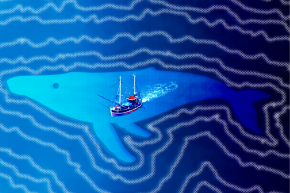 Their hearing is more complex than previously thought, and we're making a terrible racket

Whales’ haunting songs already suggest a complex form of communication beyond our easy understanding. Now it turns out we only knew half the story, as whales might also communicate through low-frequency vibrations they send through the water. Biologists only recently discovered this ability, and it might mean all our shipping and undersea drilling have been making a ton of unwanted, vibration-heavy noise for whales.

Biologists have long known that whale songs make use of pressure waves, which is the same kind of sound wave that produces the noises the human ear can pick up. But sound waves also make the substances they travel through vibrate as they pass through them, a phenomenon known as particle motion or particle velocity. Aran Mooney, a biologist at Woods Hole Oceanographic Institution on Cape Cod, Massachusetts, and co-author of the new study exploring this discovery, explained the difference between the two, starting with pressure waves.

“A loud car producing a lot of bass drives by you, and you can hear that sound,” Mooney told Vocativ. “But also your window is rattling, your seat vibrates a little bit. That’s the particle velocity component.”

Scientists hadn’t previously paid a lot of attention to particle motion. That’s in part because such vibrations don’t travel very far on land and only really matter in lower frequencies, meaning they don’t play a major role in how we hear things generally. “We can hear the car from pretty good distance away but that vibration only happens when it’s pretty close,” said Mooney. “And that’s in part because sound travels much better in water than it does in air.”

Mooney and his colleagues found out firsthand how much better those vibrations travel through water when they were on a research trip off the coast of Hawaii. They were hoping to use a new instrument that could pick up vibrations in coral reefs, which brings up another reason particle motion has been a little overlooked: It’s only very recently that marine biologists have had the technology to detect particle motion and measure it in the same way they would pressure waves.

The researchers first tested the instrument by getting close to some humpback whales and seeing what vibration signals they picked up. “Lo and behold this big loud signal showed up,” said Mooney. “And so we allowed ourselves to drift away from the whales until we got upwards of 200 meters from the whales. So it was surprising that not only did we get this nice loud, clear signal, but we were getting it from some distance away — a distance the whale could probably use for communication.”

Mooney said subsequent research suggests humpback whales can send these vibrational signals from at least a kilometer away. While this doesn’t prove whales definitely use particle motion to communicate, we know two of their closest land-based relatives — elephants and hippos — do. Elephants use particle motion to send what Mooney described as “alarm calls,” sending and sensing vibrations through their feet that they can use to signal emergencies and find the rest of the herd. Hippos, meanwhile, also use particle motion, which allows them to sense underwater sounds even while their ears are above the water.

Whales also share similar inner ear anatomy with their evolutionary relatives, suggesting their ears might be well-suited for picking up vibrations. Mooney said whales’ lower jaws might even act as a kind of tuning fork for these vibrations, picking up and conducting those particle motion sounds to the ears.

More Why Humpback Whales Are Saving Animals From Hungry Orcas

And if whales do sense underwater vibrations over great distances, then we humans have been far noisier in the oceans than we thought. Construction projects, commercial shipping, and underwater drilling and mining all make varying degrees of more familiar, pressure wave noise, but the amount of low-frequency vibrations they create could be considerably worse for whales.

“If this is something that they hear and are aware of as particle motion, then we have to be pretty clear on what sort of noise we’re putting into the ocean and how that might be affecting their detection of these types of signals,” said Mooney. “Noise in the ocean is really increasing rapidly. It’s doubling every 10 to 20 years. With all the increasing commercial ships and larger shipping industry and our resource exploration in the ocean, we’re just producing more and more noise. And so if we’re missing or not recording or not understanding half of that sound, that’s a big deal for the animals that are dependent on sound.”

Human noise pollution could be disrupting some pretty significant vibrations for the whales. Because particle motion literally refers to particles shaking back and forth in a specific direction, it’s possible for animals that can sense it to work out the location of where the vibrations are coming from. That means whales might use particle motion to help work out where others are. “You’re giving the animal a whole other set of cues to find that singer in a pretty complex, three-dimensional space underwater,” said Mooney. “Sound is really the vital cue for these animals. Vision is obviously pretty limited underwater, but sound is the way that you can find your way around and communicate with each other.”

Since research into particle motion and whales is still in its infancy, we can’t say with any certainty what impact we might have. But previous studies on the pressure wave variety of human noise pollution has suggested whales will change their communication signals in the presence of background noise, sometimes producing the sounds at higher frequencies. “Their stress levels increase in relation to background noises as well,” said Mooney. “When that noise is present, it’s a stressor for them.”

The good news, though, is that if our vibrations are indeed being too loud for the whales, this is one environmental problem we can actually solve pretty easily. “Noise in the ocean isn’t necessarily like climate change or acidification in the ocean, where even if we stopped now the pollutants in the atmosphere would continue to be there for 20 or 30 years,” said Mooney. “Noise is something that you can switch off relatively quickly. So if you can make quieter ships or if you can stop certain noise sources like seismic exploration, then that can really reduce your noise levels in the oceans.”