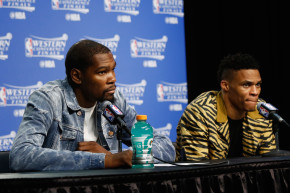 The Westbrook-Durant Beef Is Beautiful And Should Last Forever

Who cares how real it is? It's real to us

If all the hype — the months of vague quotes from Kevin Durant that were a priori assumed to be backhanded swipes at his former teammates; Russell Westbrook’s equally un-subtle shade and/or glowering refusals add fuel to the simmering fire (while doing just that); the failed attempts to downplay any ongoing resentment; Durant’s, ‘Hey, what are you reporters doing here? I was just finishing up a killer workout, totally alone,’ following an after hours shooting session — started to feel like overkill, Westbrook upped the theatrics and the attendant drama just by walking into the arena.

And despite all the denials and assurances from all parties that this was just another regular season tilt, it wasn’t. Durant, long perceived as the cool, calm center to Westbrook’s unrelenting storm, got mad. He ran roughshod over the Thunder, scoring 39 points and nailing a career-high seven threes, blowing the doors off the league’s number one overall defense in a 122-97 victory that felt like the first of many pounds of flesh to be extracted.

It took Durant a bit to get going, but perhaps the one lesson the Thunder and Westbrook can hip pocket for their next clash (January 18 at the Oracle Arena! Pricey seats still available!) is that it’s a terrible idea to poke the bull. After Jerami Grant powered to the rim and yammed on Durant, he then paused to unleash a Kevin Garnett-ian howl right in his mug.

“When you get dunked on like that,” Durant said after the game and shaking his head in dismay, according to the San Jose Mercury News. “As a competitor, you want to come back at him.”

“Not a good idea,” Steve Kerr added, describing the turbo boost Grant’s posterization provided. “I think it got him going.”

Yes, yes it did. The Warriors transformed back into the freaking Warriors, going on a 22-3 run, with Durant racking up 29 first half points, connecting from way downtown, and barking at Enes Kanter and the rest of the Thunder bench.

Westbrook came into the night averaging an eye-popping 37.8 points, 10.5 rebounds and 10.0 assists while powering Oklahoma City to a 4-0 start, but he seemed oddly passive. He was content to kick the ball out to less-than-stellar shooters, his forays to the rim walled off by double- and triple-teams, as the Warriors took a few steps towards rediscovering their smothering defense, even if they’re still lacking much rim protection.

But regardless of the outcome, what made a relatively meaningless and tension-free blowout so much dang fun is this: they care. It may seem simple or self-evident, but for all the silly questions about “narrative” or gossipy plumbing of the depths of their relationship, fans will invest both emotional and actual currency if the drama we’re gawking at reads as not just an empty performance, but the real deal. Anger. Regret. Bile. A bit of sly trolling thrown in to the mix. And joy. Real, unfettered joy.

As SB Nation’s Spencer Hall noted, in contrast to the NFL’s quasi-militaristic conformity, what the NBA does so well is allow for all these rough edges, weirdness, and genuine humanity to come shining through, even if you weren’t willing to stay up long past midnight on the east coast to watch the entire game. You can pluck out all the neat gifs and vines the next day, or come across a tweet where Durant responds to Westbrook’s pre-game attire with, “I don’t care about what nobody wear to the game. Who gives a shit? I don’t care what he wore.”

But he does. He clearly does. Dismiss the Durant-Westbrook feud as so much soap opera fluff if you like, but people love soap operas specifically because they provide a frame for the grand interplay of our most extreme emotions and physical states of being. How is this different? Westbrook’s going to go off in January. I can’t wait. Can you?