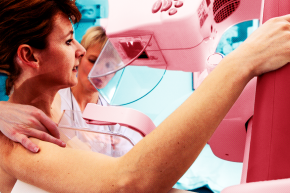 New Mammogram Would Be Radiation Free, With Zero Boob-Smooshing
By Tracy Clark-Flory

New Mammogram Would Be Radiation Free, With Zero Boob-Smooshing

In news sure to be welcome to any woman who has ever sidled up to a mammogram machine and had her boobs compressed between two cold plates, researchers are developing an alternative way to screen for breast cancer. It uses sound waves instead of X-rays and, more importantly, features zero breast-smooshing.

Researchers behind the new study, published in the online journal Scientific Reports, boldly claim that this radiation-free approach — which has a patient lie on a table while, as a press release puts it, “the breast hangs freely in a bowl” — is actually more accurate than the traditional mammogram. The researchers haven’t yet tested their method on actual women’s breasts, but a recent successful test on a non-human models has the team ready to move toward preclinical trials.

More The Battle Against Breast Cancer: A Brief History

Researchers at Eindhoven University of Technology in the Netherlands developed the method, which is tongue-twistingly referred to as Dynamic Contrast Specific Ultrasound Tomography. A doctor injects tiny gas-filled bubbles, each less than a hundredth of a millimeter across, into the patient’s bloodstream and then uses ultrasound to detect the sound wave produced by the bubbles. By precisely tracking the vibration caused by the bubbles, they are able to create a 3D image of the breast as well as any tumors.

“Any cancer is clearly identifiable on the generated images,” according to the press release. “The researchers therefore expect there to be many fewer false-positive results.”

With traditional mammography, a woman’s breast is pressed between two plates for an X-ray. This can, as you might expect, be slightly uncomfortable, although the process is supposed to last only a few seconds. In addition to the potential for discomfort, mammograms come with concerns about a high rate of false positives, meaning a mammogram appears to show cancer when there is no cancer present. One study found that more than half of women will receive a false positive at some point during 10 years of annual screenings. These false positives can lead to unnecessary, invasive tests and over-treatment.

More More Men With Breast Cancer Are Getting Their Breasts Removed

This new technique would also cut down on the radiation exposure from traditional mammograms, although experts disagree as to how much of an issue this is. While one study has found that yearly mammograms can increase breast cancer risk among young high-risk women, the amount of radiation in a mammogram is minimal and comparable to the exposure a woman might get over the course of a week in regular life. “The benefits of mammography … nearly always outweigh the potential harm from the radiation exposure,” according to The National Cancer Institute.

Mammograms are the current accepted standard and are generally considered to be safe, but this method could offer the possibility of greater comfort and no exposure to radiation. That potential is still a long way off, though. The researchers are preparing for preclinical studies and say it’s still at least ten years before their method could be applied in the real world. So, for now, mammograms and smooshed boobs it is.