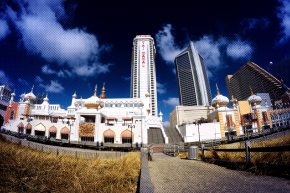 Donald Trump has left, but his tarnished legacy here has not

“Take a look at the giant vista of the Taj Mahal,”  a spirited Levi Fox says, gazing up at the behemoth structure. “When it was completed in 1990, it was the tallest building in the state of the New Jersey, largest casino in the world, and Mr. Trump called it the 8th wonder of the world. Then the problems began almost immediately,” he explains.

Donald J. Trump has spent the past 18 months running on his wealth and record as a businessman. And for Fox, and many others in town, the landscape of Atlantic City works as a stand-in for both that much-touted success, and Trump’s spectacular failures. The Republican nominee was once the largest employer in this beachside New Jersey town, owning three massive casinos that adorned his name. But before long, it all came slowly crashing down. Last month, years after Trump lost control of the property in messy bankruptcy proceedings, his crown jewel shut down. There is no longer a single Trump property in Atlantic City.

Enter Fox, a local historian and charismatic Ph.D. student, who now gives walking tours of Trump’s legacy in the town for $16 a pop. The narrative is nonpartisan — but in the weeks leading up to one of the more contentious elections in history, the political traces are hard to escape.

We silently stare at the newly deceased Taj for a moment, the calls of seagulls echoing overhead. Donald Trump’s prized property had closed barely 24 hours ago on this beautiful Tuesday morning in Atlantic City. Its 51 floors and 2,010 hotel rooms are completely vacant. Just a few other people have made it to this north end of the Boardwalk, which has seen three separate casino closures since 2014. Only the resilient Resorts Casino, America’s first legal non-Nevada casino, remains. The few passersby milling around on the sun-soaked boards slowly approach the entrance of Taj, peek through the glass, and give a short tug on the door. Like much of Trump’s tenure in Atlantic City, it doesn’t seem quite real.

As we leave the empty Taj behind and proceed south, Fox dives into Trump’s background as a Manhattan real-estate magnate and his maneuvering to rapidly acquire three massive casinos in the 1980s. He’s since sold one and the other two have closed.

Fox, the operator of his own tour company, started leading Donald’s Trump’s Gambling Heritage Tour a couple months ago after a few successful test runs on friends over the summer. I’m the only participant today, understandable since it’s a weekday in the off season, but business has been picking up as voting gets closer.

Fox has only been giving tours for a couple months, but even still, new revelations have constantly altered the script “I’ve ended up rewriting the tour more than once,” he said, specifically noting the New York Times explosive report on his 1995 tax filings. Trump’s legacy here evolves with every new story.

On his tours, Fox likes to weave Trump’s tale with the story of Atlantic City itself. While bobbing in and out of Trump’s casino dealings, he also describes the early days of salt water taffy and the historical inaccuracies of the HBO hit “Boardwalk Empire” (the benches face the ocean in the show, in reality they face the Boardwalk for people watching purposes). “I want people to learn more about Atlantic City because I got them on the hook with Trump.”

He takes great pride in telling a balanced, factual narrative, and it shows in his citation of several sources along the way. “There’s a tradeoff between storytelling and truth telling,” he says. “Giving these tours, I’ll tell you the best story I can without lying.”

Trump’s family is only mentioned once — when Fox notes his second wife Marla Maples as a possible leaker for Trump’s tax filings. There is one instance, however, where he feels compelled to share not only what he’s learned in his studies, but what he’s experienced as a member of a once-terrorized group.

As we pull up to Atlantic City’s Holocaust Memorial, he pauses, collects himself, and takes a deep breath.

“This is time on the tour where I step on a soapbox. The Holocaust Memorial reminds us of the times in history when we have grouped an entire segment of the population together by their faith and that has had tragic consequences,” he says, a thinly veiled reference to Trump’s Muslim ban. “As a historian in our current political climate I think it’s important to be aware of any sort of reverberations, any sort of lessons that we may have forgotten. And now I’m off the soapbox.”

Fox is adamant about not presenting a position on this tour — with the exception of this stop. “I’m half Jewish. I don’t feel like I have to apologize for that.”

Not every tour, which spans about a mile, has been without drama. Several pro-Trump hecklers interrupted along the way. And, he notes, Fox’s knowledge is often challenged by participants anytime he brings up the word “bankruptcy.”

“I’m not trying to sensationalize anything here,” he said on a later call. “I just try to feel out every group to see what I should try to emphasize more or less.”

Fox is from nearby Somers Point, and you get the sense that he truly cares about the welfare and survival of the place. At the New Jersey North Korean War Memorial, located just feet off the Boardwalk, he laments the background voice of Guy Fieri, whose repetitive robocall tries to lure visitors into nearby Bally’s Casino while others try to reflect on the second deadliest American war in the post-WWII era. He wonders if marijuana legalization could bring back business to the town, just like alcohol did during Prohibition and gambling did in the 1980s.

As Fox explains Trump’s leveraging of tax loopholes, we arrive at our final stop: The old Trump Plaza which closed in 2014. Its bright red TRUMP PLAZA lights were taken down and the facade’s faded colors were boarded over months ago. But sheet of plywood recently tore down, leaving the T-R-U visible on the building’s facade, another subtle reminder of the Trump empire in Atlantic City.

Looking through the large glass windows, there’s a restaurant ready for business. The tables are set with silverware, the floors are spotless, the bar is still flush with liquor. But no one is inside.