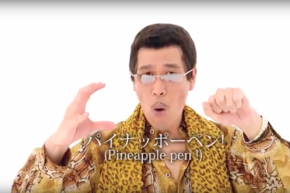 Someone Opened A ‘Pen Pineapple Apple Pen’ Cafe In Japan

Paying tribute to the Piko-Taro meme, the restaurant mostly serves...pineapples and apples

You probably haven’t stopped humming Pen Pineapple Apple Pen since the quirky little tune went viral in September, but now there’s a whole new way to experience the PPAP sensation: a pop-up cafe in Tokyo. It only makes sense that a place responsible for cat cafes would also play host to a monument for the nonsensical song and its creator, Piko-Taro.

Although it’s not an official business endeavor, the people who created PPAP cafe (unsurprisingly) make good use of pineapples and apples. And apparently there are a lot of pens made out of chocolate too. But if you’re in the mood for something other than dessert, there’s the PPAP burger which relies on clever wordplay for its sales hook: The first and last P’s in the acronym stand for Pan (“bread” in Japanese), the second P stands for “P/Bulgogi” (Korean marinated beef), and the A is for Avocado.

But chances are that people aren’t going to PPAP cafe for the food; they’re likely going for the novelty of it all — specifically to document their visit on your various social media accounts. Thus there is no shortage of photos of people hamming it up with photos of Piko Taro (also known as comedian and DJ Kosaka Daimaou) in his signature animal prints and various pens, pineapples, and apples.

If you want take a real-life bite out of PPAP, you’ll have to get yourself to Tokyo soon, since the cafe is set to close on November 20th. But if a trip to Japan is not in your future, perhaps this will inspire you to throw your very own PPAP-themed dinner party.