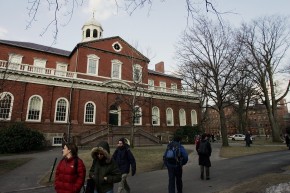 An apparently annual tradition of the Harvard men’s soccer team is creating sexually explicit “scouting reports” of incoming women’s soccer recruits, which has prompted the university to cancel the remainder of its men’s season.

The student newspaper, the Harvard Crimson, first reported on the practice in late October after obtaining a copy of a 2012 write-up—which reportedly had been publicly available through Google Groups—in which new freshmen women’s players were assigned a numeric ranking with written assessments and a hypothetical sexual “position” to go along with each’s soccer position. The practice reportedly continued through the current season.

The Crimson reported that comments ranged from one woman receiving the nickname “Gumbi” because of her large “gum to tooth ratio” to describing another as “very strong, tall and manly so, I gave her a 3 because I felt bad.” The document referred to a report from the previous year and stated the belief that one player “was both the hottest and the most STD ridden was confirmed.”

The men’s players declined comment to the Crimson; the men’s coach, Pieter Lehrer, wrote in a statement that he was “shocked and disgusted” and that he was “beyond disappointed that our season has ended in this way, but we respect the decision made by our administration.”

The Crimson reported Friday that, in addition to the season cancellation, the university’s Title IX office—which oversees the review and enforcement of sexual harassment complaints—is “responding” to the discovery of this document.

The women victimized by the crass and lewd write-up are now seniors and collectively published a brave op-ed in the Crimson last week that read, in part:

In all, we do not pity ourselves, nor do we ache most because of the personal nature of this attack. More than anything, we are frustrated that this is a reality that all women have faced in the past and will continue to face throughout their lives. We feel hopeless because men who are supposed to be our brothers degrade us like this. We are appalled that female athletes who are told to feel empowered and proud of their abilities are so regularly reduced to a physical appearance. We are distraught that mothers having daughters almost a half century after getting equal rights have to worry about men’s entitlement to bodies that aren’t theirs. We are concerned for the future, because we know that the only way we can truly move past this culture is for the very men who perpetrate it to stop it in its tracks.

The men’s soccer team only has two regular season games remaining but stood in first place atop the Ivy League standings and now will forfeit a chance to participate in the conference and NCAA tournaments.

“We strongly believe that this immediate and significant action is absolutely necessary if we are to create an environment of mutual support, respect and trust among our students and our teams,” Harvard athletic director Robert L. Scalise wrote in an email to student-athletes, according to the New York Times, and telling the Crimson, “Harvard Athletics has zero tolerance for this type of behavior.”

University President Drew G. Faust said she was “deeply distressed” to learn of the practice and wrote in a statement: “The decision to cancel a season is serious and consequential, and reflects Harvard’s view that both the team’s behavior and the failure to be forthcoming when initially questioned are completely unacceptable, have no place at Harvard, and run counter to the mutual respect that is a core value of our community.”

This news and these allegations are but the latest salvo adding to the urgency of stopping campus rape culture in which one in four women report that they are victims of sexual assault. What Donald Trump dismisses as “locker room talk” can be pervasive in creating a hostile environment. As the Harvard women’s players put it, “The whole world is the locker room.”

“To the men of Harvard soccer and to the men of the world, we invite you to join us, because ultimately we are all members of the same team,” the women’s players wrote. “We are human beings and we should be treated with dignity. We want your help in combatting this. We need your help in preventing this. We cannot change the past, but we are asking you to help us now and in the future.”