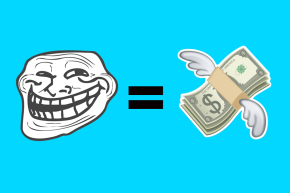 Cyberbullying Victim Wins $1.4 Million From His Tormentor
By Sara Morrison

Harassment does not pay. In fact, it may cost a lot

In one of the largest civil judgements of its kind in this country, an online troll has been ordered to pay $1.4 million to a man who says the cyberbully tormented him and his family on- and offline.

William Moreno, a 33-year-old man who lives with his parents in Virginia, “joked” about 9/11, beating women, and raping children on a local forum called Fairfax Underground under the name “Mr. Misery” between 2009 and 2012, when he was banned.

But Moreno isn’t the cyberbully in question here — he’s the victim. According to a Washington Post article about the case before it went to trial, some forum users took exception to Moreno’s posts. Moreno says he has Asperger’s and depression, so he saw the forum as a place for social interaction he found it difficult to come by in the real world. His father admitted to a local TV station that Moreno has a “very dark humor” and “did do some strange things.”

Michael Basl, or “eesh,” is accused of taking it upon himself to harass Moreno offline (it’s unclear how Basl was able to figure out who Mr. Misery was, but Moreno’s identity was posted in the Fairfax Underground thread that announced his banning), sending emails to his student address and putting notes on his car, posting untrue allegations that Moreno had raped a teenage girl or was preparing to blow up his school on Fairfax Underground (which then affected his mother’s ability to obtain security clearance at her job), breaking into and vandalizing his house, and posting a message posing as Moreno, saying that Moreno had killed his family. That message then brought law enforcement, guns drawn, to the Morenos’ front door. Basl admitted to some of these things but has denied others.

After a few years of harassment — and with Moreno suicidally depressed over the attacks — he struck back with a lawsuit accusing Basl of defamation, stalker, intentional infliction of emotional distress, and trespassing. According the Post, Basl was found guilty everything but trespassing and ordered to pay $1.4 million. He told the Post that he was “very disappointed” in the verdict. Moreno said he hopes Basl has “learned something” and that the harassment will end.

The massive civil judgement does not appear to have hampered Basl’s activity on Fairfax Underground. “eesh” still posts there frequently, though does not appear to have commented yet on the outcome of his civil trial, preferring instead to be active in threads about the penis sizes of white men and Hillary Clinton’s pantsuits. As for the rest of Fairfax Underground, they’ve only just found out about the judgement but have posted reactions including “WTF?”, “Heil Trump!”, and, “what a ridiculous judgement to compound an even more ridiculous case.”