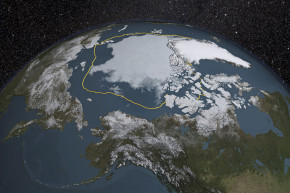 The United Nations warned on Thursday that the world must further slash carbon emissions in order to avoid preventable “human tragedy.”

A new “Emissions Gap” report by the U.N.’s Environment Program found that current pledges to reduce emissions would lead average global temperatures to rise by as much as 3.4 degrees Celsius above pre-industrial levels—well above the 2 degrees set by the Paris climate agreement that goes into effect on Friday. The UNEP says that CO2 emissions projected for the end of the next decade (2030) must be cut by 25 percent in order to diminish the chances of dire climate impacts.

UNEP head Erik Solheim said that the world is “moving in the right direction” in terms of slowing climate change and reducing greenhouse gas emissions, but more mored need to be done. “If we don’t start taking additional action now, beginning with the upcoming climate meeting in Marrakesh, we will grieve over the avoidable human tragedy,” he said in a statement. “The growing number of climate refugees hit by hunger, poverty, illness and conflict will be a constant reminder of our failure to deliver.”

More By The Numbers: The Historic Paris Climate Change Agreement

Next week, U.N. climate negotiators from 196 countries will meet in Marrakesh, Morocco, to implement the Paris agreement. World leaders in December reached a pact and agreed to the goal of keeping warming to “well below” 2 degrees Celsius (3.6 degrees Fahrenheit) above pre-industrial levels, with an aim to cap the increase at 1.5 degrees Celsius. The agreement was ratified the United States, China, and the European Union, as well as several others. But, as the Guardian points out, no countries attending the Marrakech meeting are expected to commit to new emissions reductions that the latest UNEP report implies are necessary to mitigate further climate change.

According to NASA, 2016 is “locked in” to be the hottest year on record, surpassing last year’s record-breaking heat. Still, 2015 was the first year that average surface temperatures were a full degree Celsius above pre-industrial levels.