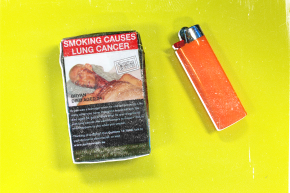 Graphic Warnings On Cigarette Labels Could Save A Half-Million Lives

Such labels have already proved successful in 70 countries, including Canada and the U.K.

In more than 70 countries worldwide, you can’t buy a pack of cigarettes without having to look at a picture of diseased lungs, rotting teeth, a tracheotomy survivor, gangrenous toes, or some other visceral reminder of the harms that cigarettes cause. These graphic warning labels aren’t just there for shock value — study after study has shown they absolutely do work to get people to quit smoking. In fact, they work so well they could prevent at least half a million – maybe more than a million – deaths here in the United States over the next 50 years.

Those are the findings of a new study in the journal Tobacco Control, which looked at how these graphic labels have changed smoking rates elsewhere in order to simulate what effect they could have in the U.S. In particular, they looked to three of the most culturally and economically comparable countries to the United States: Australia, Canada, and the United Kingdom. All three countries implemented graphic smoking warnings within the last decade, and they all saw estimated drops in cigarette use of about 10 percent relative to the previous levels. Smoking is generally declining, but that’s still a big bump up from the “natural” rate of about five percent decline.

Co-author David Hammond of the University of Waterloo told Vocativ there are more than 200 studies involving hundreds of thousands of smokers worldwide that demonstrate the effectiveness of these labels. Yet the United States has not joined other countries in making the move.

“The U.S. hasn’t changed its health warnings since the 1970s,” he told Vocativ. “There’s more evidence on milk containers than there are on cigarette packs.”

More How Often Do Cigarettes Lead To Cancer Death?

American courts struck down an effort a few years ago to require such pictorial warning labels, or PWLs, after tobacco companies sued the Food and Drug Administration.

“The US court decision to strike down FDA’s PWL rule hinged in part on a concern, based on estimates that the PWLs might not produce any significant reduction in smoking,” Hammond and his co-authors write in their paper. “Accumulating research, however, indicates that compared with text-only warnings, PWLs are more effective for capturing smokers’ attention, influencing perceived risks of smoking and attitudes towards smoking, and motivating quit attempts, but also work directly to reduce smoking prevalence.”

About 19 percent of men and 15 percent of women in the United States currently smoke, a figure that’s projected to drop to about 14.4 percent for men and 10.8 percent for women by 2065. That’s if we do nothing.

Graphic labels, on the other hand, could knock a percentage point or two off both those rates. That might not sound like a colossal reduction, relatively speaking, but even a small decrease can add up over a half-century in a country this size.

“Even if it only works for one out 100 people, there’s about 40 million smokers in the US,” said Hammond. “So that accrues to a pretty big impact over the entire population.” Indeed, that kind of effect across a half-century would add up to about an extra two million or so people who either quit smoking or never start in the first place.

More These Stores Were Busted For Selling Cigarettes To Kids

Then there are all the deaths such labels could prevent. It wouldn’t be very many at first – maybe around 250 in the first year such labels are used – but that number would increase to about 18,000 people each year by 2065. Added up over 50 years, that’s at least 650,000 people still alive who otherwise would have died from a smoking-related disease. And that’s just what the researchers consider the likeliest scenario, where the initial reduction is five percent and increases to 10 percent. If the reductions hit the simulation’s most favorable projections, the number of preventable deaths could be nearly 1.2 million.

The paper also simulated what these label-driven reductions would mean for the kids of smokers. They estimated that, between now and 2065, graphic labels could prevent nearly 50,000 children from being born at a low weight, nearly 75,000 from being born premature, and about 1,000 from dying of Sudden Infant Death Syndrome. And the study doesn’t even consider the potential for avoiding health complications and reducing hospital bills that would come with such a big, nationwide reduction in smoking.

But is it the labels themselves that drive that change, or are the countries that adopt such measures also more likely to pursue other policies that aggressively target smoking? Hammond said it’s not possible to randomized trials with public health measures like this, so there will always be a difficulty in isolating the exact effect of a specific policy, particularly when the impact is felt over years or even decades.

“One of the challenges is this isn’t something you change on Monday and all the effects happen on Wednesday,” he said.

More What Are You Smoking? Study Suggests You Have No Clue

To some extent, Hammond said the question of correlation or causation wasn’t so important, as the World Health Organization actually advocates for countries to accompany new graphic labels with mass media campaigns to help get the message across. That’s actually an area where the U.S. already excels, even as its labels lag behind.

“The US has always been good on mass media,” said Hammond. “There’s a very good foundation that could be linked to the warnings if the country were to do that.”

A particular benefit of such labels is that they would be seen by all smokers.

Reaching low-income smokers is particularly crucial, as the evidence suggests smoking is declining more slowly in those groups. Hammond said these labels are one of the most effective ways to educate people of all socioeconomic backgrounds of the real dangers of smoking.

“That’s because that little health billboard is in every corner store, it’s in millions of people’s pockets and on the table,” he said. “You don’t have to have access to a doctor who tells you to stop. You don’t have to have a smartphone to tell you your public health message. The advantage is it follows you around.”

Hammond and his colleagues were actually conservative in using a long-term reduction estimate of 10 percent, when the most recent data suggests it’s actually closer to 13 percent. And while it’s conceivable the actual results wouldn’t be quite what this simulation found, the results in all the other countries to implement these labels are already plenty compelling. Graphic warning labels work. Unless you’re really worried about protecting what tobacco companies claim is their First Amendment right to sell tobaccos unimpeded by repulsive labels, there’s no real reason not to at least give them a try.