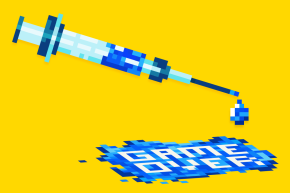 Is Internet Gaming Disorder A Legitimate Diagnosis?
By Allee Manning

Could as many as one million Americans suffer from "internet gaming disorder"?

Internet Gaming Disorder sounds a bit like a made-up psychological problem — but in 2013, it was recognized by the American Psychiatric Association, not as a formal condition, but as something warranting more clinical research. Now, some of that research is here.

A new study from researchers at Oxford University, published in the American Journal of Psychiatry, looked at more than 10,000 men and women from the U.K., U.S., Canada, and Germany who had recently played internet-based games. It found that three-quarters of all gamers included within the sample had no symptoms associated with addictive gaming behavior — and only 0.3 to 1 percent might “qualify for a potential acute diagnosis of internet gaming disorder,” suggesting that internet-based games might be significantly less addictive than gambling.

“It is difficult to separate the hype from the science. The basic idea that there might be non-substance based addictions besides gambling addiction is a controversial one,” report author Andrew Przybylski told Vocativ in an e-mail. “It has been argued by many psychologists and mental health researchers that pathologizing gaming could open the door to thinking about many other behaviors, like being an avid sports fan, as disordered.”

The respondents, who were selected through YouGov and Google surveys, were asked to report which, if any, of the symptoms often associated with internet gaming disorder they experienced. The nine symptoms are preoccupation with internet gaming, experiencing withdrawal, developing a tolerance, loss of control, continued use, misleading others, use as an escape, reduced interest, and risked opportunities. Nearly 70 percent of Americans experienced no symptoms whatsoever. Just under 3 percent had five or more, and the most commonly reported symptom among U.S. gamers was using internet games as a means of escape.

In order to show any indication of an internet gaming disorder, the researchers determined that the respondent must experience at least five of the indicators. The vast majority of all respondents across all countries reported zero symptoms, but Americans between the ages of 18-24 had the highest potential diagnosis prevalence at 1 percent, compared to all Americans 18 or older, at only 0.3 percent. The potential prevalence in the surveyed adults aged 18-24 in the U.S., the U.K., Canada, and Germany, overall was a little lower at 0.7 percent.

Those numbers are low, but the researchers noted that if this figure was applied to the massive population of U.S. gamers, this could represent as many as one million people meeting the criteria for online gaming addiction. However, more clinical approach (rather than self-reporting) would be necessary to confirm such an extrapolation.

Of the few respondents that did meet the threshold for internet gaming disorder consideration, only marginally lower levels of mental, physical, and social health could be observed, something researchers did not expect.