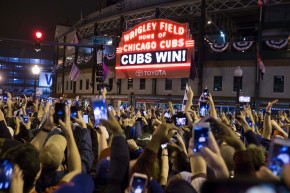 The Cubs Win And The Past Is Finally The Past

With the wait over and the curse dead, a look back on the greatest Game 7 ever played

Baseball is the sport of hopeful waiting, one whose increments are usually measured in seconds and pitches or months and seasons. For the Cubs and Indians, however, that hopeful waiting had long become interminable, extending to years, decades, generations, and, for the Cubs, more than a century.

It was altogether fitting then that a tied World Series Game 7 between these franchises would have a karmic pause before its culmination; a 17 minute rain-soaked reminder of what came before, with the drought all but at its end. Either the Cubs or Indians would not so much erase their agonizing wait, but rather get their long overdue chance to let those memories of failure fuel something worth celebrating. Past would finally become prologue.

The elongated finale, a 10-inning, 4-hour-and-28-minute back and forth affair, left fans in a familiar state of pendulumic emotion that had long since become a familiar sort of pain. However, one franchise’s suffering would soon turn to champagne-soaked ebullition.

This was a Game 7 like no other, and it began like none had before, with Chicago’s Dexter Fowler hitting a home run to leadoff the game and shifting fortune toward the Cubs.

The Indians would swing history’s trajectory back in the third inning with Carlos Santana’s run-scoring single and a two-runner threat before the Cubs bats would dismiss Cleveland ace Corey Kluber, who, on the verge of playoff immortality, would succumb to the sport’s one guarantee: failure.

October’s pitching stalwarts would all lose their luster as the World Series stretched further into November. Kluber failed to strike a batter out for the first time in his career, bequeathing a 4-1 deficit that would only grow under the postseason’s breakout star, Indians reliever Andrew Miller, who yielded four hits for the first time since shifting to the bullpen some five years ago.

Cubs All-Star Jon Lester, typically steady and dominant when throwing toward the plate but skittish in any other direction, stood idle on a squibbed groundball, leaving his 39-year-old, retiring catcher to retrieve the hit and attempt an unwise throw that sailed into the stands. That set up a rare plate-ward misfire that bounded wildly away from David Ross for a two-run score on one errant pitch.

Ross has long been the favored son of fans, media, and pitchers—albeit both the ones he’s catching and those trying to get him out—and would redeem himself with a home run that stunned even himself into silence as he circled the bases.

The game seemed out of reach for Cleveland in the eighth, the odds against them with the sport’s hardest-throwing pitcher on the mound. Aroldis Chapman, who began the season serving a domestic violence suspension, now held the baseball and the opportunity for the Cubs to clinch a championship, only to surrender what would later be calculated as the third-most important hit in baseball history, a two-run, game-tying homer to slumping outfielder Rajai Davis. The game began anew.

Despite social prophecy of an apocalyptic arrival—two years prior, someone foretold the end of times in a tied extra-inning, World Series Game 7 between these very two teams—the passing of rain was a natural reprieve, a deep breath and a necessary one at that. Off in the stands was Theo Epstein, architect of the Red Sox’ title drought-ending club, who would soon add another line to his résumé as a curse-breaking sorcerer.

The Cubs’ Ben Zobrist, who’d later receive the Series MVP award, delivered the finishing blow, a double onto which Chicago would add a necessary insurance run. Nothing could come easy, as in the bottom half of the final inning, the Indians would scratch a run off rookie reliever Carl Edwards Jr—a lithe right-hander apparently called the String Bean Slinger—before giving way to Mike Montgomery to induce the final out. It was over.

That moment, a groundout felt throughout Chicago, was received by third baseman Kris Bryant, who fielded the ball with a grin across his face.

Kris Bryant smiling as he fields and throws for the final out is the greatest. pic.twitter.com/8bAU1ayKbJ