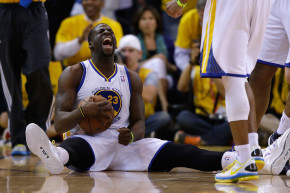 People forget that the Warriors blew a 3-1 lead, but not Draymond Green

Oh no, Draymond Green. You don’t get to rewrite the rules here. How long didja have that one chambered, huh? I’d wager giving you a free shot at my nads that it’s been sitting in drafts from the moment LeBron James decided to liven up his Halloween party decorations with this savage burn:

Or maybe it’s been waiting since Fox turned the cameras to James’ sweet luxury box at Progressive Field where he howled and flexed after Rajai Davis mashed a game-tying two-run dong in the bottom of the eighth inning off of the gassed Cubs’ closer and (alleged) spouse-strangler, Aroldis Chapman.

What do you think of this game, @KingJames? https://t.co/Ef707eSxGI #Game7 pic.twitter.com/RvGQcX4mfX

Sure, for the more kind-hearted souls out there, this could be read as an act of kindness or an attempt to express something universal about the pain and the agony of an epic, devastating collapse. And though he might not admit it — at least not as readily as he fessed up to his central role last June — it still seethes and simmers a particularly dark, vengeful corner of his heart. One former Warriors assistant coach wasn’t leaving any room for interpretation, wallowing in schadenfreude and giving the dagger a nice, slow twist.

But regardless, blasting out that passive aggressive tweet doesn’t shunt the mantle of blowing a 3-1 lead on to Cleveland’s tormented back. The Indians weren’t some earth-devouring colossus like the Warriors, nor did they smash the record book and warp the very dimensions of the game. More to the point, memes are for the people, and they get to amplify and determine their ultimate meaning and usage. Draymond can add another chapter to the Warriors’ heel turn and be as salty as he wants. But for now, it is the Golden State Warriors and only the Golden State Warriors who blew a 3-1 lead in the NBA Finals. People forget that.

Dammit, Cleveland. There's a time and a place for this stuff! pic.twitter.com/f47XiU0GE6