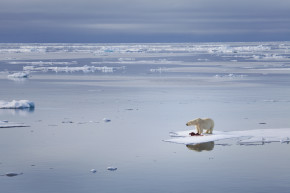 Climate Change Could Melt All The Arctic Ice By 2045

Yes, that would be very, very bad

Ice has been disappearing in the Arctic Ocean since at least 1979. Each summer, there’s less and less sea ice in the frozen north, and it’s likely only a matter of time before climate change leaves the Arctic completely free of ice, with potentially devastating consequences for the planet.

Climate scientists Dirk Notz and Julienne Stroeve calculated that every ton of carbon dioxide emissions is responsible for melting three square meters of Arctic sea ice. The average human is responsible for about five tons of CO2 each year – and the average American is responsible for 16.5 tons – meaning every person on the planet emits enough carbon to melt anywhere from 10 to 50 square meters of ice every year. Multiply that by the seven billion and counting people on the planet, and humanity will emit enough CO2 at current rates to leave the Arctic ice-free during the summer months in as little as 30 years.

“We’re all dependent on the ice,” Stroeve, a researcher at the National Snow and Ice Data Center at the University of Colorado, told Vocativ. “It’s not just the polar bears and the walruses and the seals that need the ice. Humans do too because it keeps our climate at the optimal level.”

That’s because the Arctic ice isn’t simply a massive reminder that it’s colder in the higher latitudes. The presence of the ice actively keeps the planet cooler than it would be if the Arctic were all open water.

“The ice there helps reflect most of the sun’s energy back up to space,” said Stroeve. “If you take away that reflective ice cover over the ocean the Arctic, the ocean is now going to absorb all the heat from the sun during the summertime. So that causes the ocean to warm up.”

If the ice does melt and the Arctic Ocean starts absorbing more heat, that will make the planet as a whole warm faster. Stroeve said this would likely also lead to sea level rise, the release of more methane into atmosphere, and the melting of northern permafrost in places like Greenland and Siberia. And there’s very good reason for us to want to keep the permafrost, as its name suggests, permanently frozen.

“The amount of carbon stored in the permafrost is more than what’s in the atmosphere today,” said Stroeve. Melting the Arctic ice creates feedback loops that can increase the warming, which – like in the case of the permafrost – can then speed up the warming still further.

But it wouldn’t just be the northern latitudes that would be affected. The Arctic climate is just one part of the global system, and the stability of temperate and tropical regions depends on the planet’s ability to move excess heat toward the poles.

In our current climate system, the jet streams are essential to moving that heat northward. But this warming would slow down those air currents, creating the potential for high-pressure and low-pressure systems to clash, creating extreme weather events. Worse, the slower movement of the jet streams could lead those systems to get stuck for longer periods of time. That could mean anything from fiercer storms and longer droughts to more sudden cold snaps and heavier snowfall.

Considering the sea ice could completely melt within as little as 30 years, there’s not necessarily a whole lot that can be done. Stroeve said cutting back on emissions alone probably wouldn’t be enough to stave off this catastrophe. The best way forward, in her view, would be to pursue drastic reductions in emissions in tandem with aggressive efforts to capture carbon and remove it from the atmosphere by planting more trees and getting the planet to absorb some of the excess.

Stroeve is skeptical that any of the more exotic proposals to use high-tech geoengineering would do much good. She said one plan would be to build an artificial reflective surface over the Arctic, but at best that would be too limited a solution.

“That wouldn’t really work,” she said. “That would maybe reflect the sunlight and keep the ice from melting, the rest of the planet is warming. You’re going to keep transporting heat to the Arctic because that’s what ocean circulation does.”

Besides, no technological wizardry can get around the basic math that the researchers have identified.”

“Once we have emitted 1000 billion tons of CO2, global warming will reach around 2 °C, and Arctic sea ice will be gone in summer,” Dirk Notz, a researcher at the Max Planck Institute for Meteorology, told Vocativ in an email. “No matter when we have emitted this amount.”

That could be 2045, or 2075, or 2035, or maybe even sometime in the 22nd century if we’re very lucky. But given how much CO2 humanity emits into the atmosphere every year, an ice-free Arctic is just a matter of time. And even Notz and Stroeve can only guess what something that unprecedented in human history might mean for our planet.

“I still think in a lot of ways we don’t understand what’s going to happen,” said Stroeve. “It’s hard to imagine.”