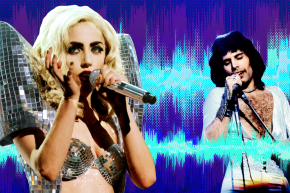 Just about everyone gets songs stuck in their head, with past research suggesting 90 percent of people experience it at least once a week. But what makes for the perfect earworm song? According to a new study, the answer basically boils down to: Just do what Lady Gaga does.

Researchers in the United Kingdom surveyed 3,000 people to find out how often they experienced earworms, how they dealt with songs getting stuck in their heads, and which songs in particular tended to get stuck there. With all music in existence to choose from, the respondents provided plenty of different answers to that last question, but nine songs were named more than 10 times. University of Durham researcher Kelly Jakuboski said these songs revealed some of the key features for a successful earworm.

“Earworms tended to have a faster tempo, so they tend to be more upbeat melodies,” Jakuboski told Vocativ. “The second feature that emerged was earworm tunes tended to make use of quite generic or commonly used melodic shapes in comparison in general.”

Melodic shapes have to do with how the pitch changes over the course of the song. She pointed to “Twinkle, Twinkle Little Star” as one of the most recognizable and commonly used melodic shapes — the pitch starts low, rises over the first line, and then falls again over the second. While a successful earworm likely shouldn’t be too avant-garde in its structure, these distinctive changes or unusual features – like using bigger beats than are typically found in pop songs – could be key to their enduring success.

“I think this could be due to the brain searching for optimal level of complexity in a melody,” said Jakuboski. “A melody that’s not too simple but not too complex to remember.”

Based on the survey results, Lady Gaga is an undisputed master of the earworm, with “Bad Romance” easily topping the list and another two of her songs in the top nine. She’s helped a little bit by the timeframe of the survey — it was conducted between 2010 and 2013, right around the peak of her popularity — but placing three songs on the list shows a definite knack for getting stuck in people’s heads.

“Once you’ve written one catchy song, you might intuitively have this sort of earworm formula in your mind,” Jakuboski said of Lady Gaga’s success. “You know that you’ve done it once and you can make use of that again, even if it’s in a slightly different way.”

While Lady Gaga might be getting a recency boost, the next two songs on the list count as old classics by pop music standards. Kylie Minogue’s “Can’t Get You Out Of My Head” – which, yes, is rather apt – came out in 2001, while Journey’s “Don’t Stop Believin'” came out in 1981. (Though, that songs only made the U.K. charts for the first time in 2009 after its re-release.)

The real ancient on this list, though, is Queen’s “Bohemian Rhapsody,” which came out in 1975 and hasn’t been in the U.K. charts since shortly after. That song’s enduring catchiness is particularly interesting given its complex structure, with slow-burning opening and closing serving as bookends for a rocking crescendo. While Jakuboski hasn’t yet specifically studied how the complexity of a song affects its earworm potential, she said most people probably don’t have the entire song stuck in their heads.

“We know that they tend to be quite short snippets of a song repeating over and over in the head,” she said. “So although Bohemian Rhapsody has these really amazing structures in terms of the complexity and the tempo changes, actually you just get a small snippet of that repeating in your head.”

More The Neuroscience Behind Paying For Music Online

Still, the song’s complexity might make it harder for people to move past that one catchy bit stuck in their heads.

“That could perhaps add to the looping nature,” said Jakuboski. “We do have evidence from people that one of the reasons they think they might have an earworm stuck is that they can’t remember the end of the song, so they get stuck in one section. So if they go and listen to the full song through, then they can get rid of the looping and get rid of the earworm.”

Indeed, the survey revealed listening to the entire song as one of people’s preferred methods for getting rid of it.

“People said they need to actually engage with the earworm tune,” said Jakuboski. “So sometimes they say if they listen to the whole song out loud, they can get rid of the looping and get closure with the song. The second strategy people used was to distract themselves with either another song or other auditory material, such as talk radio.”

While Jakuboski’s research focuses on music and earworms in particular, she said these catchy tunes speak to a broader phenomenon of the mind.

As for why catchy songs remain such a common example of this stray thinking, it might have to do with why we connect with music in the first place.

“We have a very intimate emotional relationship with music,” said Jakuboski. “So that can actually lead to some of the distracting elements of earworms as well.”